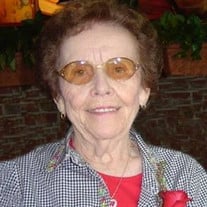 Laura Zinn (Williams) Barnard, age 102, of Marion, IL, formerly of Cave In Rock, IL, passed away peacefully of heart failure with family by her side at 2:50 a.m., on Monday, February, 25, 2019, at her residence. She was born on Tuesday, October 3, 1916, at home in Eagle Creek Township of Gallatin County, IL, the daughter of Thomas Jefferson (Jeff) Williams and Gretchen (Zinn) Williams. Laura Z. was married to the love of her life, Radford Gregory (Rad) Barnard on Monday, July 24, 1939, in St. Charles, MO, and together they shared over 67 years of marriage until his death on Friday, March 30, 2007. They had two children, Brenda Kay and Charlie Rad. She attended school in Gallatin County and graduated from Shawneetown High School in 1935. She moved to Carbondale, IL and graduated from Southern Illinois State Normal University in1938, with a teacher’s certificate. She began her teaching career in a one room school named Pisgah, of the Junction, IL area. After marriage, she moved to Cave In Rock, IL, and taught in a one room school called Love. Once her children were born, she remained home to care for them and returned to teaching when her daughter was a senior in high school. She enjoyed being a first grade teacher and teaching the children to read and write. Many students remember her in their adulthood and share what fond memories they have when she was their teacher. She taught a total of 23 years and retired in 1981. Laura Z. had a long time faithful membership with Cave In Rock First Christian Church. She enjoyed the monthly dinners and quilting in the church basement for many years. She and her husband were active members and mentors to many who attended. They moved to Marion, IL in 2002, and regularly attended Aldersgate United Methodist Church with family members. Some of her other memberships included the Eastern Star where she was a lifetime member and achieved 2 star points. She had served in the positions of Worthy Matron, Ada and Martha. She also was a former Lioness of the Cave In Rock Lions Club and was member of the Illinois Retired Teachers Association. Laura Z. enjoyed shopping, dining, playing games and vacationing with her family. She would be thrilled to grab her purse and go with any of the four generations that called her Mom, Mamaw, Grandma Laura Z or Grandma Z! The many memories that have been created will now be cherished by those she leaves behind. She is survived by her son Charles Radford Barnard of Cave In Rock, IL, son-in-law Bill Bayne of Cave In Rock, IL, daughter-in-law Marna Barnard Heron and husband John of Estes Park, CO, seven grandchildren, Gregory K. Bayne, Gayla D. Dale and husband Charles, Gina Kay Reed and husband Jeremy all of Cave In Rock, IL, Judi Kay Main and husband Joe and Laura Susan Jones and husband Jim all of Marion, IL, Michelle Barnard and husband Joe Sewter of Newtown, PA, Angela L. Barnard of St. Louis, MO, fourteen great grandchildren, Julie A. Wallace and husband Hunter of Murray, KY, Bryan R. Bayne and Brady B. Dale all of Cave In Rock, IL, Brandi E. Gullett and husband Mike of Carbondale, IL, Chad R. Barnard and wife Kasey of Skokie, IL, Michelle Cook and husband Andrew of Clarksville, TN, Rob J. Main and wife Amber of Chicago, IL, Rachel V. Weakly and husband Josh of Bloomington, IN, Jessica L. Milligan of St. Louis, MO, Anna J. Milligan of Garland, TX, Jaclyn K. Morgan and husband Luke of Murray, KY, Josi L. Reed of Miami, OK, Henry A. Jones of Carbondale, IL and Emily A. Jones of Marion, IL, nine great-great grandchildren Tom and Piper Gullett of Carbondale, IL, Jaxon Wallace of Murray, KY, Luke Bayne of Harrisburg, IL, Emmy and Tommy Barnard of Skokie, IL, Audrey, Hannah, and Gwyneth Weakly of Bloomington, IN and many other family members and friends. She was preceded in death are her parents, husband, daughter Brenda Kay Bayne, grandson “Chip” R. Barnard, brother and sister-in-law, Charles Thomas and Phyllis Williams, niece Joyce Ann Williams, and grandparents Thomas Jefferson and Laura Etta (Hale) Williams and Charles Christian and Laura Jane (Robinett) Zinn. Arrangements for Laura Zinn (Williams) Barnard were entrusted to Wilson-McReynolds Funeral Home, 900 N. Court St., Marion, IL. The visitation was from 5:00 p.m. until 8:00 p.m. on Thursday, February 28th, at the funeral home. During the time of visitation a “Reflection of Life” DVD Memorial Tribute featuring special people, places and events in Laura Z’s life was presented to family and friends. The graveside committal service was at 11:00 a.m. on Friday, March 1, 2019, at Cave Hill Cemetery, located just north of Cave In Rock, IL on IL State Route 1, with Pastor Lance Leeds presiding. Those attending the graveside committal service gathered at the cemetery prior to 11:00 a.m. Special recorded vocal musical selections presented during the service were “Give Me Jesus” by Jeremy Camp and “I Will Rise” by Chris Tomlin. The service concluded with the congregation reciting “The Lord’s Prayer”. Pallbearers were Brady B. Dale, Henry A. Jones, Bryan R. Bayne, Hunter Wallace, Rob J. Main and Josh Weakley. Following the service, interment was next to her husband. For those who preferred, memorial contributions were made to either or all; “Cave Hill Cemetery” of Cave In Rock, IL, “First Christian Church” of Cave In Rock, IL, “Hospice of Southern Illinois” of Marion, IL, “Aldersgate United Methodist Church” of Marion, IL” and mailed in care of Wilson-McReynolds Funeral Home, 900 N. Court Street, Marion, IL 62959. For additional information or to leave an online condolence of memory please visit our website at www.wilsonmcreynolds.com or call the funeral home at 618-993-2131.

Laura Zinn (Williams) Barnard, age 102, of Marion, IL, formerly of Cave In Rock, IL, passed away peacefully of heart failure with family by her side at 2:50 a.m., on Monday, February, 25, 2019, at her residence.... View Obituary & Service Information

The family of Laura Zinn Barnard created this Life Tributes page to make it easy to share your memories.

Send flowers to the Barnard family.