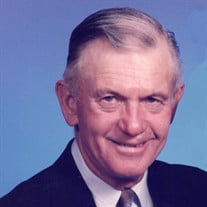 Lawrence A. Fosse, age 92, of rural Goreville, IL, passed away peacefully at 10:30 a.m. on Sunday, August 6, 2017, at his home. He was born on Saturday, May, 9, 1925; at home in rural Marion, IL the son of Erwin and Bessie (Gulledge) Fosse. Lawrence attended grade school at the Mission Ridge Grade School in Marion and was a graduate of Marion High School Class of 1943. He answered the call of this nation by serving in the United States Army toward the end of WW II and after his period of faithful service was honorably discharged. After his discharge, he continued his education by attending the University of Illinois of Champaign, IL in 1948 and later at Southern Illinois University of Carbondale, IL. He was united in marriage to Ina Mae Albright on Thursday, March 17, 1949, in Piggott, AR, and together they have shared over 68 years of marriage. In 1951, they moved to Elk Grove, IL and made their home there until they returned back to Goreville in 1979. Lawrence’s lifelong working career was as an operating engineer, operating heavy equipment used in construction. He also had obtained his real estate agent license and sold real estate working with the Les Stilley Real Estate Agency of Marion. After he retired he still enjoyed clearing land, grading, and digging ditches with his 1954 backhoe. Earlier in his lifetime he attended and was a member of the Freedom Free Will Baptist Church located south of Marion. He also was a lifetime member of the American Motorcycle Association, member of Local Union No. 150 of LaGrange, IL, the International Union of Operating Engineers, and Marion V.F.W. Heyde-Pillow Post No. 1301. He loved to travel and in his spare time, he and Ina enjoyed riding their BMW motorcycles, traveling to all 50 states along with Mexico and Canada. He is survived by his wife, Ina Mae Fosse of Goreville; sister, Fern Bowen of Marion; brother and sister-in-law, Gale and Norma Fosse of Goreville; three sisters-in-laws and two brother-in-laws, Betty Sullivan, Vennetta Maze and husband Harold, and Lois Brewer and husband Clyde all of Goreville; a host of nieces and nephews; other extended family; and many friends. He was preceded in death by his parents and four brothers, Ray, Wayne, Lavern and Jim Fosse. Arrangements were entrusted to Wilson-McReynolds Funeral Home, 900 N. Court St., Marion, IL. The visitation was from 5:00 p.m. until 8:00 p.m. on Wednesday, August 9th at the funeral home. The funeral service was at 11:00 a.m. on Thursday, August 10, 2017, at Wilson-McReynolds Funeral Home with Pastor Gary Clark presiding. The prelude and postlude musical selections were presented by pianist, Diane Ozment. Special vocal musical selections presented during the service were “Does Jesus Care” and “Time Has Made a Change” both by Pastor Gary Clark, Rindi Nehrkorn and Diane Ozment who also accompanied on the piano. Also presented was “What a Friend We Have In Jesus” as a congregational hymn with pianist, Diane Ozment accompanying. Interment followed in McKinney Chapel Cemetery of rural Goreville, IL near the Lake of Egypt. Pallbearers were Mike Pritchett, Lewis Fosse, James Maze, Chris Brewer, Stacy Sullivan and Shane Maze. Military honors were accorded at the graveside by members of Heyde-Pillow V.F.W. Post No. 1301 and American Legion Post No. 147 both of Marion and the Illinois National Guard Funeral Honors Burial Detail of Marion. Those participating were Commander and Officer of the Day, Art Ambros; Chaplain, Ron Ganzer; Bugler, Bill Rice; Color Guard, Bob Casey and Roger Morris; National Colors, Ernie Rinella; Post Colors, George Trammel and Firing Squad, Gene Broombaugh, Don Burgrabe, Ralph DeVasier, Bill Hampsey, Chris Payne, Fred Read and Ron Russell. Member of the Illinois National Guard Funeral Honors Burial Detail participating in the folding of the flag were SGT Garrett Lukens and SSGT Brandon Page. During the folding of the flag the recorded musical selection “America the Beautiful” was presented. Presentation of the folded flag to Ina Mae was by SGT Garrett Lukens. Following the committal service at the cemetery the family and friends gathered at McKinney Chapel Church for a meal and continued time of fellowship. For those who preferred, memorial contributions were made to “McKinney Chapel Cemetery” in care of Wilson-McReynolds Funeral Home, 900 N. Court Street, Marion, IL 62959. Memorial envelopes were available at the funeral home. For additional information please contact the funeral home by calling 618-993-2131.

The family of Lawrence Allen Fosse created this Life Tributes page to make it easy to share your memories.

Send flowers to the Fosse family.