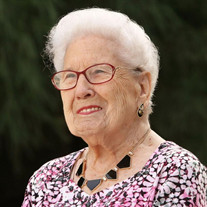 Leah R. Keller, age 96, of Duluth, GA, and formerly of Marion, IL passed away peacefully at 5:44 p.m. on Friday, August 31, 2018 at her home in Duluth, GA. Leah was born March 6, 1922, in Moberly, Missouri, the daughter of William and Edna (Meals) Armstrong. Leah moved to Marion as a young child and graduated from Marion High School with the Class of 1940. She was first united in marriage to Roland Pulley “R.P.” Wilson and to this marriage two children were born. She and R.P. shared 26 years of marriage until his death on June 8, 1967. She was later united in marriage to Dr. Lynn Edsel Keller on January 10, 1976 and together they shared over 33 years of marriage until his death on August 9, 2009. Leah was very active in her church and community. She was a member, deaconess, and elder of the First Christian Church (Disciples of Christ) in Marion and served many years as the board Chairman. She was Elder Emeritus of the First Christian Church in Sebring, Florida. She also served on Marion Recreation Board for 25 years. Some of her other memberships include the following: lifetime member of Marion Civic Center Foundation; lifetime member of the Girl Scouts of the USA; member of PEO; member Heartland Regional Medical Center Women’s Association. When her children were growing up she was involved as a Girl Scout Leader and a Cub Scout Mom. In her later years she enjoyed playing bridge, golfing, and traveling. Survivors include a son, Roland B. "Pete" Wilson and his wife, Geneal, of Cypress, TX; a daughter, Sallie Barrett and her husband Johnny, of Duluth, GA; a stepdaughter, Lynn Anne Henderson and her husband, Archie Bob, of Marion; six grandchildren, Roland “RL” Wilson and his wife, Jacqueline, of Clarendon Hills,IL, Brett Wilson and his wife, Judy, of Cypress, TX; Leah Rasori and her husband Paul, of Milton, GA.; Andrew Kirby and his wife, Christina, of Flower Mound, TX; a step-granddaughter, Patricia "Tricia" Moake and her husband, Eddie, of Marion; a step-grandson, Scott Henderson and his wife, Michelle, of Savoy and 13 great-grandchildren, Roland K. Wilson, Magdaline Wilson, Emmett Wilson and Valerie Wilson, all of Clarendon Hills, IL; Lucas Wilson and Courtney Becker, both of Cypress, TX; Jakob Roscoe and Sofia Roscoe, both of Milton, GA; Olivia Kirby and Jack Kirby both of Flower Mound, TX; Jennifer Head of Carbondale, IL; Sarah Moake of Herrin, IL; Taylor Henderson and Ryan Henderson, both of Savoy; and other extended family and many friends. She was preceded in death by her parents and both husbands, her brothers Walter “Bud” Armstrong and Charles Armstrong, and a grandson, William “BJ” Kirby. Arrangements for Leah R. Keller have been entrusted to Wilson-McReynolds Funeral Home, 900 N. Court St., Marion. The visitation was from 6:00 p.m. until 8:00 p.m. on Wednesday, September 5th, 2018, at the funeral home. During the visitation a “Reflection of Life” DVD Memorial Tribute was presented to the family and friends and featured special people, places, and events of Leah’s life. The funeral service was at 11:00 a.m. on Thursday, September 6th, 2018 at the funeral home with Gary Rothenberger presiding and Rev. William Rucker assisting. The prelude and postlude musical selections were presented by pianist, David Stotlar. Special vocal musical selection presented during the service was “He Lives” by Mary Rothenberger who was accompanied by David Stotlar on the piano. During the service special comments of memory were presented by John McPeek, Sofia Roscoe, Roland Wilson, and Maggie Wilson. The closing prayer was presented by Rev. Geneal Wilson. Interment followed in Rose Hill Cemetery in Marion. Those serving as pallbearers were Roland Wilson, Brett Wilson, Andy Kirby, Rocky Wilson, Emmett Wilson, and Jack Roscoe. Following the graveside committal service at the cemetery, family and friends gathered at the First Christian Church-Disciples of Christ for a meal and continued time of fellowship and support. For those who preferred, memorial contributions were made to “First Christian Church-Disciples of Christ” or the “Houston Area Parkinson Society” and mailed in care of Wilson-McReynolds Funeral Home, 900 N. Court Street, Marion, IL 62959. Memorial envelopes were available at the funeral home. For additional information call the funeral home at 618-993-2131.

The family of Leah R. Keller created this Life Tributes page to make it easy to share your memories.

Send flowers to the Keller family.