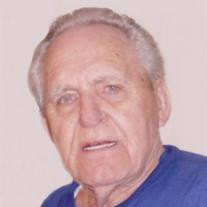 Lee F. Gwaltney, age 83, of Marion, passed away suddenly on Friday, September 14, 2012, in Ripley, TN. He was born on Saturday, December 22, 1928, in Huntsville, AL, the son of Easton Justice “E. J.” and Susan (Kimbrough) Gwaltney. Lee answered the call of this nation by serving in the United States Air Force during World War II and after his period of faithful service was honorably discharged on March 21, 1948. Lee was united in marriage to Joann Woods on Wednesday, November 14, 1951, in Piggott, AR and together they have shared fifty-three years of marriage until her death on Thursday, January 13, 2005. He later married Linda Diane Fisher and she survives of Ripley, TN. He was of the Pentecostal faith and when possible attended Lamaster Pentecostal Church of Marion. For many years Lee was a truck driver for Shawnee Express and White Brothers Trucking, traveling all over the lower forty-eight states and Alaska and said he wanted to go back and visit all the places he passed by. He was an avid reader; he loved the Lord and especially enjoyed reading the Bible. He was a Cubs fan and never gave up hope for his team. He enjoyed watching reruns of old westerns and other movies with his family. Most of all he enjoyed visiting and spending time with family and friends enjoying the many times they shared together. “He was the best dad ever” and will be missed by his family and many friends. He is also survived by his daughter and son-in-law, Diana Lee and Michael Morgan of Marion, IL; two sons and daughters-in-law, Frankie J. and Norma Gwaltney of West Frankfort, IL and Danny G. and Julie Gwaltney of Marion, IL, twelve grandchildren, nine great grandchildren; one great great-granddaughter, Jazmine Helma; four sisters and three brothers-in-law, Jean and James Smith of Holland, MO, Mae Helen and Charles Koonce of Rolla, MO, Frances Jane Crowder of Ripley, TN and Linda Gail and Tommy Barnes of Ripley, TN; brother E. J. Gwaltney of Halls, TN, several nieces, nephews, other family members and many friends. He was preceded in death by her parents; his first wife, Joann Gwaltney; two sisters, Susan Gwaltney and Mary Underwood; brother, Danny Calvin Gwaltney and infant brother, Robert Gwaltney. Arrangements for Lee F. Gwaltney were entrusted to Wilson-McReynolds Funeral Home, 900 N. Court St., Marion, IL. The time of the visitation was from 11:00 a.m. until 2:00 p.m. on Tuesday, September 18, 2012, at the funeral home. During the time of visitation a “Reflections of Life” DVD Memorial Tribute featuring special people, places and events of Lee’s life was presented to the family and friends. Following the time of visitation the funeral service was at 2:00 p.m., Tuesday, at Wilson-McReynolds Funeral Home of Marion, with Rev. Clark “Butch” Short presiding. The prelude and postlude musical selections were recorded piano selections. Special recorded vocal musical selections presented were “Amazing Grace”, “Peace In the Valley’ and “I’ll Fly Away” all by Jimmy Swaggart and “Leaning on the Everlasting Arms” as a recorded taped selection from Joann’s service presented by the Gwaltney Family. Interment followed in Maplewood Cemetery of Marion. Pallbearers were Robert Gwaltney, Jamie Gwaltney, Carey Gwaltney, Travis Gwaltney, Jerrid Gwaltney and Cody Gwaltney. Military honors were accorded at the graveside by members of the V.F.W. Heyde-Pillow Post No. 1301, American Legion Post No. 147 and the Illinois National Guard Flag Detail, all of Marion, IL. Those participating were Commander, Larry Largent; Chaplain, Dan Fruge; Officer of the Day, Pat Campbell; Bugler, Brian Samuel; National Colors, Ernie Rinella; VFW Colors, Bill Reynolds; American Legion Colors, Bill Hatfield; Color Guard, Ralph DeVasier and Jessie James and Firing Squad, Don Burgrabe, Ron Ganzer, Jim Grieme, Bill Hampsey, Nate Hopkins, Fred Read and Bill Stewart. Members of the Illinois National Guard Flag Detail participating in the folding of the flag were SGT Aaron Robinson and PVT Mario Medina. Presentation of the folded flag to Lee’s son, Frankie was by PVT Mario Medina. Following the committal service at the cemetery the family and friends gathered at Unity Freewill Baptist Church of West Frankfort, IL for a meal and continued time of fellowship and support. For those who preferred, memorial contributions were made to “The American Red Cross-Little Egypt Network” and mailed in care of Wilson-McReynolds Funeral Home, P.O. Box 370, Marion, IL 62959. Memorial envelopes were available at the funeral home. For additional information please contact the funeral home by calling 618-993-2131.

The family of Lee Frank Gwaltney created this Life Tributes page to make it easy to share your memories.

Send flowers to the Gwaltney family.