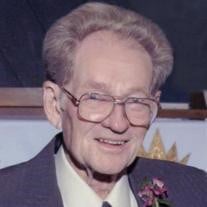 Leslie F. White, age 88, of Marion, passed away at 7:10 a.m., on Friday, December 16, 2011, in Marion Rehabilitation and Nursing Center. He was born on Thursday, December 21, 1922, in Marion, the son of Thurmond and Clara (Campbell) White. Leslie was united in marriage to Bernadine (Bullock) Hagan on February 4, 1979, in Marion and together they shared over thirty-one years of marriage until her death on July 4, 2010. He was a member of Shiloh Christian Church of Marion. His working career was as a carpenter of home construction. He also owned and operated the Dairy Queen in Marion, from 1964 until 1979 and the Dairy Queen of Sun City, AZ for 2 years. He loved working and visiting with the many customers and was proud of the quality product he served. His Dairy Queen was awarded the “Golden Cone Award” for many years. In his spare time he enjoyed woodworking and building crafts, especially bird houses. He also did a lot of traveling and camping and especially enjoyed the times his family would go camping with him, especially his grandchildren. He is survived by his first wife, the mother of his children, Dorothy Hilliard of Marion; two daughters and son-in-law, Patty and Jim Emery of Marion and Connie Swafford of Johnston City, IL; step son, Glen Hagan and his wife, Mary of Farmington, MO; seven grandchildren, Travis Emery and his wife, Anne, Traci Robertson and her husband, Jim, Doug Draper and his wife, Erin, Cory Draper and his wife, Trisha, Anne Swafford, Casey Hagan and Joey Hagan; seven great grandchildren, Ben Emery, Kyle Emery, Brianna Robertson, Dustin Robertson, Ty Draper, Ellie Draper and Kinley Draper; two sisters, Edith Pritchett and Violet Spiller both of Marion, other extended family and many friends. He was preceded in death by his parents; daughter, Brenda White on May 30, 1966; his second wife, Bernadine Hagan White; two brothers, Howard and George White; sister, Lucille Fissell; infant brother, Glenn and infant sister, Mary and son-in-law, Duane Swafford. Arrangements for Leslie F. White were entrusted to Wilson-McReynolds Funeral Home, 900 N. Court Street, of Marion, IL. A time of visitation for family and friends was on Sunday, December 18th, from 3:00 p.m. until 6:00 p.m. at the funeral home. During the time of visitation a “Reflection of Life” DVD Memorial Tribute featuring special people places and events of Leslie’s life was presented to the family and friends. The funeral service was at 1:00 p.m. on Monday, December 19, 2011, at Wilson-McReynolds Funeral Home with Rev. Kevin McNeely presiding. The prelude and postlude musical selections were recorded piano selections. Special recorded vocal musical selections presented during the service were “Old Rugged Cross” by Alan Jackson, “In the Garden” by Patti Page and “Precious Memories” by Cristy Lane. Interment followed in Shiloh Cemetery south of Marion, IL. Pallbearers were Travis Emery, Doug Draper, Cory Draper, Ben Emery, Kyle Emery and Dustin Robertson. After the committal service at the cemetery the family and friends gathered at Scottsboro Baptist Church for a meal and continued time of fellowship and support. For those who preferred, memorial contributions were made to “Shiloh Cemetery”. Memorial contribution envelopes were available at the funeral home or were mailed in care of Wilson-McReynolds Funeral Home, P.O. Box 370, Marion, IL 62959. For additional information please call the funeral home at 618-993-2131.

The family of Leslie F. White created this Life Tributes page to make it easy to share your memories.

Send flowers to the White family.