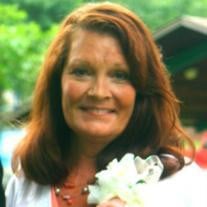 Leslie R. Comer, age 58, of Marion, IL, passed away at 3:35 p.m., on Thursday, March 15, 2012, in Heartland Regional Medical Center of Marion, IL. She was born on Sunday, August 9, 1953, in Marion, IL the daughter of William and Judy (Reichert) Carlile. Leslie attended school in Carbondale, IL and was a graduate of Carbondale High School in 1972. Leslie was united in marriage to Clarence Comer on March 21, 2009 in Marion, IL and together they have shared the last three years of marriage. Early in her lifetime she worked for J.C. Penny’s Company during the 1970’s and later her working career was as a Legal Secretary. She was a member of the First United Methodist Church of Marion, IL. In her spare time she actively supported and was involved with the American Cancer Society Relay for Life, Williamson County Special Education Program, the Marion After School Study Program where she was known as “Miss B” and the Marion Regional Humane Society. She is survived by her husband, Clarence “Butch” Comer of Marion, IL; mother, Judy Binns of Marion, IL; son and daughter-in-law, Ryan and Tamara Abney of Marion, IL; two granddaughters, Dylan Noel Abney and Karsyn Drew Abney, both of Marion, IL; daughter and son-in-law, Erin and Jeremy Anderson of Marion, IL; grandson, Cole Rowan Anderson of Marion, IL; daughter, Lauren Broeking of Marion, IL; two brothers and sister-in-law, Jon and Anita Binns of Marion, IL and William Carlile of WI; two sisters, Heather Carlile and her, son Zach Nigbur, and Julie Carlile, all of WI; son and daughter-in-law, Clarence and Christina Comer Jr. of Marion, IL; daughter and son-in-law, Stacy and Scott Kuhlmann of Harrisburg, IL; aunt, Carol Pullis of Marion, IL; uncles, Jim Reichert and his wife, Linda of Marion, IL and Tom Reichert and his wife, Leah of Marion, IL, several other special grandchildren, cousins, nieces, nephews and many friends. She was preceded in death by her grandparents, Russell and Virginia Reichert; and father, William Carlile. Arrangements for Leslie Rae Comer were entrusted to the Wilson-McReynolds Funeral Home, 900 N. Court Street, Marion, IL. The time of visitation was on Tuesday, March 20th, between the hours of 4:00 p.m. and 8:00 p.m. at the funeral home. During the time of visitation a “Reflection of Life” DVD Memorial Tribute featuring special people, places and events of Leslie’s life was presented to the family and friends. The funeral service was at 2:00 p.m. on Wednesday, March 21st, at Wilson-McReynolds Funeral Home with Rev. Jeff Van Dyke presiding. Comments of memory were presented by Leslie’s husband, Clarence. The prelude and postlude musical selections were recorded piano selections. Special recorded instrumental piano selections presented during the service were “Clair de Lune” and “Fur Elise”. Interment followed in Egyptian Memorial Gardens Cemetery of Energy, IL. Pallbearers were Ryan Abney, Sean Jones, Jeremy Anderson, Clarence Comer, Jr., Jonathon Gray and Van Ewell. Following the committal service at the cemetery the family and friends gathered at the First United Methodist Church of Marion for a meal and continued time of fellowship and support. For those who preferred, memorial contributions were made to “Marion Regional Humane Society”. Memorial contribution envelopes were available at the funeral home or were mailed in care of Wilson-McReynolds Funeral Home, P.O. Box 370, Marion, IL 62959. For additional information please call the funeral home at 618-993-2131.

The family of Leslie R. Comer created this Life Tributes page to make it easy to share your memories.

Send flowers to the Comer family.