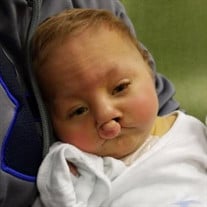 Logan James McCann, age 10 months, of Marion, IL, passed away peacefully with his family by his side at 11:34 a.m. on Friday, July 20, 2018 at his home. He was born on Monday, September 18, 2017 in St. Louis, MO, the son of Kyle Robert and Jacqueline Renee (Rich) McCann. He is survived by his parents, Kyle and Jackie McCann of Marion; one brother, Jaxton Gene McCann of Marion; one sister, Addyson Lynn Rich of Marion; maternal grandparents, James and Monica Rich of Coello, IL; paternal grandmother, Kay McCann of Jacksonville, FL; paternal step grandmother, Angela McCann of Goreville, IL, maternal great grandmother, Brenda Lamczyk of Mulkeytown, IL; paternal great grandparents, Edwin and Patricia McCann of Vienna, IL and Bill and Marion Howard of Anderson, IN; and a host of aunts, uncles, cousins, and other extended family. He was preceded in death by maternal great grandparents, Obie and Hazel Rich and James Lamczyk and paternal grandfather, Terry McCann. Arrangements for Logan McCann were entrusted to Wilson-McReynolds Funeral Home, 900 N. Court St., Marion, IL. The visitation for the family and friends was from 5:00 p.m. until 8:00 p.m. on Tuesday, July 24, 2018 at the funeral home. During the visitation a “Reflection of Life” DVD memorial tribute was presented to the family and friends and featured special people, places, and events of Logan’s life. The funeral service was at 11:00 a.m. on Wednesday, July 25, 2018 at the funeral home with Pastor Bill Littrell presiding. The prelude musical selections were recorded vocal musical selections of “One Call Away” by Charlie Puth and “My Wish” by Rascal Flatts. Special recorded vocal musical selections presented during the service were “Because You Loved Me” by Celine Dion, “You Should Be Here” by Cole Swindell, “Five More Minutes” by Scotty McCreery, and “Heaven Was Needing a Hero” by Jo Dee Messina. The postlude musical selections were recorded vocal musical selections of Angels Among Us” by Alabama, “God Gave Me You” by Blake Shelton, and “Holes in the Floor of Heaven” by Steve Warinar. During the service a special letter from Kyle and Jackie was read by Aaron Brewington. Following the service the family and friends gathered at the Marion Elks Club for a meal and continued time of fellowship and support. For those who preferred, memorial contributions were made to “Cardinal Glennon Children’s Hospital.” Memorial contribution envelopes were available at the funeral home or may be mailed in care of Wilson-McReynolds Funeral Home, 900 North Court Street, Marion, IL 62959. For additional information call the funeral home at 618-993-2131.

The family of Logan James McCann created this Life Tributes page to make it easy to share your memories.

Send flowers to the McCann family.