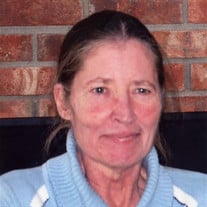 Lorrie L. Castellanoz, age 61, of Marion, IL, passed away at 1:52 a.m. on Saturday, August 22, 2015, in Heartland Regional Medical Center of Marion. She was formerly of Waukegan, IL until her and her husband moved to Marion in 2005. She was born on Saturday, March 13, 1954, in Aurora, IL the daughter of Esco and Mary Lucille (Gunterman) Williams. Lorrie attended school in Urbana, IL and was a graduate of Urbana High School Class of 1972. She was united in marriage to Vincent Charles Castellanoz on Saturday, October 29, 1977, in Urbana, IL and together they enjoyed nearly 35 years of marriage until his death on February 18, 2012. The majority of her working career was with Home Depot. She started working at Home Depot while living in Waukegan and transferred to the Marion store when she moved. At the end of her career her position with Home Depot was as an accountant. In her spare time she enjoyed watching and feeding the birds, gardening, being around animals especially her two cats and two dogs and reading. Her family was a very important part of her life, especially her grandchildren and always was interested and encouraged them in their many activities. The memories created will now be cherished by those she leaves behind. She is survived by her son and daughter-in-law, David and Silvia Castellanoz of Hinesville, GA; three daughters and sons-in-law, Mandy Castellanoz and Kevin Rodriguez of Grayslake, IL, Mary & Jimmy Kalert of Carbondale, IL and Sarah and Eric Hyden of Apollo Beach, FL; nine grandchildren, Clover, Achley, Malik, Michael, Macey, Kristyn, Norah, Isabell and Max; five sisters, Cathy Williams and wife Rosemary Nelson of Marion, IL, Mary Hobbs and husband William, Connie Conduff and husband Paul, Eva Williams and Robin Williams all of Aurora, IL; brother, Alan Williams and wife Sue of St. Charles, IL, other extended family and many friends. She was preceded in death by her parents and husband. Arrangements for Lorrie L. Castellanoz were entrusted to Wilson-McReynolds Funeral Home, 900 N. Court St., Marion, IL. The time of the visitation was from 5:00 p.m. to 8:00 p.m. on Wednesday, August 26th at the funeral home. During the time of visitation a “Reflection of Life” DVD Memorial Tribute” featuring special people, places and events of Lorrie’s life was presented to the family and friends. Special recorded music played during the visitation was a collection of Lorrie’s favorite songs. The service was private on Thursday, August 27, 2015 at 10:30 a.m. Comments of memory were presented by Lorrie’s children; David, Mandy and Mary and by her brother-in-law, William Hobbs and friends, Valerie Cook and Rosemary Nelson. Pallbearers were David Castellanoz, Eric Hyden, Jimmy Kalert, Alan Williams, Kevin Rodriguez and Steven Williams. For additional information please contact the funeral home by calling 618-993-2131.

Lorrie L. Castellanoz, age 61, of Marion, IL, passed away at 1:52 a.m. on Saturday, August 22, 2015, in Heartland Regional Medical Center of Marion. She was formerly of Waukegan, IL until her and her husband moved to Marion in 2005. She was... View Obituary & Service Information

The family of Lorrie Lee Castellanoz created this Life Tributes page to make it easy to share your memories.

Send flowers to the Castellanoz family.