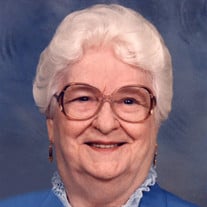 Louetta Mae McCormick, age 89, of Metropolis, IL, former longtime resident of Marion, IL, passed away peacefully in Massac Memorial Hospital of Metropolis, at 8:54 p.m. on Saturday, January 2, 2016. She had moved to Metropolis is 2007, after her husband had passed away, to be near her family. She was born on Thursday, May 20, 1926, in Dongola, IL of Union County, the daughter of Charley Presley and Grace (Adams) Lawrence. Louetta was united in marriage to Charles W. “Mac” McCormick on Sunday, June 27, 1971, in Benton, IL and together they shared over 32 years of marriage until his death on Saturday, December 13, 2003. Earlier in her working career, while living in Metropolis during the 1960’s, she worked at the Good Luck Glove Factory. After she left the glove factory she worked for Harrison’s 19th Hole Restaurant for several years and later opened her own restaurant, “The Marcella Jane”. She also served as a notary for many years. After her marriage to Mac, she moved to Marion and worked at Marion Memorial Hospital for many years. Louetta was a member of the Church of God of Marion and was actively involved until her health declined. While attending she served as secretary-treasurer of the ladies ministry. In her spare time she enjoyed cooking, quilting, attending at the Senior Citizen’s Center and going to rummage sales. Louetta was interested in the activities of her children and grandchildren, always encouraging them in their many activities and enjoyed their times together. Those memories will now be cherished by those she leaves behind. She is survived by three sons and daughters-in-law, Ronald Eugene and Virginia “Ginny” Capron of Carpentersville, IL, Charles Duane “Chuck” and Robin Short and Roger Dean and Betty Jo Short all of Metropolis, IL; two daughters and son-in-law, Ruth Ann Capron Hahn of Huntley, IL and Maxine and Richard Pierce of Maple Valley, WA; thirteen grandchildren, John Hahn and wife Sonja of Rockford, IL, Michael Short and wife Alana of Metropolis, Roger Short and wife Lucrecia of Karnak, IL, Joshua Short and wife Rachael of Metropolis, Ethan Short of Metropolis, Michelle Johnson and husband Robert of Chicago, IL, Jennifer Straka and husband Daniel of South Elgin, IL, Sierra Short of Metropolis, Raven Cohoon and husband Adam of Metropolis, Andrew Pierce of Bothell, WA, Tyler Pierce of Palermo, ME and Michelle Sorrows and Charlene Lance both of Atlanta, GA; seventeen great grandchildren, Aidan Scott Hunter Short of Metropolis, Trevor Hahn of Rockford, IL, Charlie Hahn of Rockford, IL, Austin Cohoon of Metropolis, Evan Short of Karnak, IL, Jeremy McComas of Karnak, IL, Walter G. Bauer of Metropolis, Ethan W. Bauer of Metropolis, Erik Byerley of Metropolis, Briana Wemken and husband Benjamin of San Diego, CA, Heidi Straka of South Elgin, IL, Kailyn Straka of South Elgin, IL, Alicia Inman of Karnak, IL, Autumn Cofield of Metropolis, Alivia Cofield of Metropolis, Tatum Sorrows and Chance Sorrows both of Atlanta, GA; great-great grandson, Liam Wemken of San Diego, CA; brother, Charles William “Red” Lawrence of Valier, IL, other extended family and many friends. She was preceded in death by her parents, husband; two daughters, Sharon Suzann “Susie” Short and Darlene McCormick; grandson, David Gunn; son-in-law, James Hahn; two sisters, Fayetta Lawrence and Ina Lee Lawrence and four brothers, Harvey, Bobbie Duane, James Edward and Marion Ollis Lawrence. Arrangements for Louetta Mae McCormick were entrusted to Wilson-McReynolds Funeral Home, 900 N. Court St., Marion, IL. The visitation was from 12:00 p.m. until 2:00 p.m. on Wednesday, January 6, 2016, at the funeral home. Following the time of visitation the funeral service was at 2:00 p.m. with Pastor Jimmy Russell presiding. The prelude and postlude musical selections were presented by pianist, Louise Cutsinger. Special vocal musical selections presented during the service were “I Will Meet You In the Morning” and “Victory In Jesus” both by Gayle Hale with pianist Louise Cutsinger accompanying. Interment followed next to her husband in McKinney Chapel Cemetery near the Lake of Egypt in Williamson County, IL. Pallbearers were Roger D. Short, Charles D. Short, Mike Short, Roger Short, Joshua Short and Chuck Lawrence. For those who preferred, memorial contributions were made to the “Church of God” and mailed in care of Wilson-McReynolds Funeral Home, P.O. Box 370, Marion, IL 62959. Memorial envelopes were available at the funeral home. For additional information please contact the funeral home by calling 618-993-2131.

Louetta Mae McCormick, age 89, of Metropolis, IL, former longtime resident of Marion, IL, passed away peacefully in Massac Memorial Hospital of Metropolis, at 8:54 p.m. on Saturday, January 2, 2016. She had moved to Metropolis is 2007, after... View Obituary & Service Information

The family of Louetta Mae McCormick created this Life Tributes page to make it easy to share your memories.

Send flowers to the McCormick family.