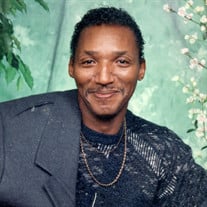 Louis D. Jackson, age 60, of Marion, IL passed away at 11:36 a.m. on Wednesday, January 3, 2018 at his home in Marion. Louis was born on Monday, July 15, 1957, the son of Willis and Ella (Thompson) Jackson. Louis attended school in Marion and was a graduate of Marion High School Class of 1975. Louis answered the call of his nation by enlisting in the United States Navy. After his period of faithful service he was honorably discharged in 1994 with the rank of Aviation Boatswain’s Mate Petty Officer 3rd Class and later worked for Marion Roof Bolt Company. He was a member of Pauls Chapel Baptist Church of Marion. The most important part of Louis’ life was family. He was always interested in all of their many activities. The many memories that have been created will now be cherished by those he leaves behind. Louis is survived by his mother, Ella Jackson of Marion; one daughter, Chiva Jackson of Hampton, VA; one son, Chad Jackson of Springfield, IL; six grandchildren; one sister, Viola Jackson of Marion; four brothers and one sister-in-law, Willie E. Jackson of Norway, David and Tracey Jackson, Roger L. Jackson, and Charles Jackson all of Marion, several nieces and nephews, other extended family, and many friends. He was preceded in death by his father, Willis Jackson; one brother Robert Jackson and half brother, Cad Jackson. Arrangements for Louis D. Jackson have been entrusted to Wilson-McReynolds Funeral Home, 900 North Court Street, Marion, IL 62959. The graveside committal service will be at 1:00 p.m. on Tuesday, January 9, 2018 at Maplewood Cemetery with Rev. Virgil Walton presiding. Those wishing to attend with the family should arrive prior to 1:00 p.m. Military honors will be accorded at the cemetery by members of Heyde-Pillow V.F.W. Post No. 1301 and American Legion Post No. 147 both of Marion and members of the United States Navy Funeral Honors Burial Detail. For additional information call the funeral home at 618-993-2131.

The family of Louis Dean Jackson created this Life Tributes page to make it easy to share your memories.

Send flowers to the Jackson family.