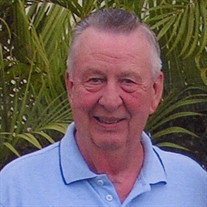 Louis David “Louie” Short, age 84, of Edwardsville, IL, former long-time resident of Marion, IL, passed away peacefully with his family near at 9:20 p.m. on Wednesday, March 10, 2021, at his home in Edwardsville. He and his wife, Sharon, moved to Edwardsville to be near family. Louie was born on Saturday, March 21, 1936, in Christopher, IL, the son of John and Flo (Gray) Short. He attended school in Christopher and was a graduate of Christopher High School Class of 1953. After graduation he went to work for General Motors in St. Louis, MO, on the corvette assembly line and was involved in building the first corvette off the assembly line. In August of 1954, he answered the call of this nation by serving in the United States Army and after his period of faithful service he was honorably discharged in August of 1956. After his discharge, he continued his education attending at Southern Illinois University School of Technology for two years. He then moved to Elgin, IL, and began working as a Tool & Die Machinist for the Elgin Watch Factory. He was united in marriage to Sharon Delores Durham on Friday, August 15, 1958, at the Second Baptist Church of Marion, and together they have shared more than 62 years of marriage. They later moved from Elgin back to Marion, and Louie began working for General Telephone in their Engineering Department and after 27 years retired in the mid 1990’s. Louie was a member of the Second Baptist Church of Marion for many years. In his spare time he enjoyed fishing and hunting, bowling, golfing, and watching college basketball and old John Wayne Westerns on television. He and his wife were avid Saluki Basketball fans and attended many of their games. He also enjoyed reading and two of his favorite authors were W.E.B. Griffin and William W. Johnstone who wrote a series of western books. He is survived by his wife, Sharon D. Short of Edwardsville, IL; four daughters, Cheryl Gardner of York, NE, Cindy D. Emery of Sandy Springs, GA, Catherine Thompson and husband, Tom of O’Fallon, IL, and Crysta Wilson and husband, Scott of Odenton, MD; four grandchildren, Joshua Gardner of St. Louis, MO, Ben Gardner of Oxnard, CA, Jessica Lagerhausen and husband, Jeremy of Troy, IL, and Jon Thompson and wife, Dominique of Yorktown, VA, other extended family and many friends. He was preceded in death by his parents; sister, Roxie Jean Eichelberger; brother, Jack Short and twin sisters, Billy Schoen and Betty Davis. Arrangements were entrusted to Wilson-McReynolds Funeral Home, 900 North Court Street, Marion. The visitation was on Wednesday, March 17, 2021, from 12:00 p.m. to 2:00 p.m. at the funeral home. Following the visitation, the funeral service was at 2:00 p.m. with Danny Ward presiding. The Prelude and Postlude were Presented by Pianist, Terry Ragain Special Vocal Musical Selections presented during the service were, “I’ll Fly Away” “When We All Get To Heaven” & “How Great Thou Art” all by Alan Jackson. Interment followed in Egyptian Memorial Gardens Cemetery of Energy, IL. Military honors were accorded at the funeral home by the members of the Heyde-Pillow V.F.W. Post No. 1301 of Marion, and members of the United States Army Funeral Honors Burial Detail. Pallbearers were, Tom Thompson, Scott Wilson, Josh Gardner, Ben Gardner, Jon Thompson and Jeremy Lagerhause. Following the committal service at the cemetery, the family and friends gathered at his daughter Catherine’s house for for a meal and continued time of fellowship and support. For those who preferred, memorial contributions were made to “Shriner’s Hospital for Children.” Memorial contributions were mailed in care of Wilson-McReynolds Funeral Home, 900 N. Court Street, Marion, IL 62959. Memorial envelopes were available at the funeral home. For additional information call the funeral home at 618-993-2131.

The family of Louis David "Louie" Short created this Life Tributes page to make it easy to share your memories.