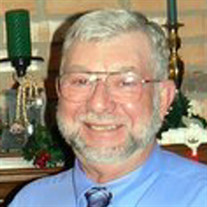 Lowell Drone, age 67, of rural Marion, IL, passed away peacefully with his family by his side at 8:36 p.m. on Saturday, November 8, 2014, in Herrin Hospital of Herrin, IL. He was born on Wednesday, June 18, 1947, at Marion, IL the son of Carl Isadore and Naomi Anverlier (Gill) Drone. Lowell attended school in Marion and was a graduate of Marion High School in 1965. He was united in marriage to Melinda Jo Keillor in Marion, IL on Friday, September 8, 1995, and together they have shared the last nineteen years of marriage. Lowell’s early working career began with Walker Wholesale of Marion, IL as one of the delivery drivers. Later he began working at the Burning Star No. 5 Coal Mine of Desoto, IL and worked there until the mine closed in 1989. He then began working with Randy Jones Plumbing of Marion until his health forced him to retire in his early 50’s. He is a member of the Heartland Christian Church of Marion, IL where he served as a deacon for 20 years. He also is a member of the United Mine Workers. Lowell was a fantastic chef and found enjoyment preparing many different types of foods. At family and church gathering the dishes he would prepare would always be the first taken. Some of his other interests included being a woodworker craftsman, a gemstone collector, a motorcycle riding enthusiast taking many trips with his wife and when his son Chris was actively involved in baseball he loved to travel watching his games and offering him encouragement. Though he always kept busy during his lifetime with work and his other interests the most important part of his life was his family. He looked forward and enjoyed the times they would all gather together and treasured all the memories that were created. He is survived by his wife, Melinda Jo Drone of Marion, IL; three daughters, Randa Drone of St. Louis, MO, Brandie Drone of Herrin, IL and Kim Raish of Belleville, IL; two sons, Zachery Smith and Chris Drone both of Marion, IL, fifteen grandchildren, two great grandchildren; sister and brother-in-law, Ruth and Jerry Roper of Wetumpka, AL; brother James Drone of Marion, IL, two special long haired dachshunds, Mia and Bailey, other extended family and many friends. He was preceded in death by his parents. Arrangements for Lowell H. Drone were entrusted to the Wilson-McReynolds Funeral Home, 900 N. Court Street, of Marion, IL. The time of visitation was from 4:00 p.m. until 7:00 p.m. on Tuesday, November 11th at Heartland Christian Church, located at 900 East Boyton St. in Marion, IL. The funeral service was at 11:00 a.m. on Wednesday, November 12, 2014, also at the church with Rev. Greg Gibbs presiding. The prelude and postlude musical selections were presented by pianist, Justin Nehrkorn. Special vocal musical selections presented during the service were; “It Is Well With My Soul” as a congregational hymn with pianist, Justin Nehrkorn accompanying and “In the Sweet Bye and Bye” by Rindy and Justin Nehrkorn with Justin accompanying also on the piano. Special recorded vocal musical selection presented during the service was “This Ole House” by Stuart Hamblen. Interment followed on the Drone family lot in Creal Springs Cemetery of Creal Springs, IL. Pallbearers were Brandie Drone, Chris Drone, Zachery Smith, Mark Bruce, Len Bruce and Devin Steh. Following the committal service at the cemetery the family and friends gathered back at Heartland Christian Church for a meal and continued time of fellowship and support. For those who preferred, memorial contributions were made to “Heartland Christian Church”. Memorial contribution envelopes were available at the funeral home and the church or were mailed in care of Wilson-McReynolds Funeral Home, P.O. Box 370, Marion, IL, 62959. For additional information please contact the funeral home by calling 618-993-2131.

The family of Lowell Henry Drone created this Life Tributes page to make it easy to share your memories.

Send flowers to the Drone family.