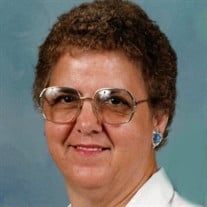 Lula B. Feltz, age 82, of Creal Springs, IL, passed away peacefully with her family near, at 3:53 p.m. on Tuesday, August 31, 2021, at her home. She was born on Sunday, August 20, 1939, in Creal Springs, IL, the daughter of Harrison B. and Elsie N. (Barwick) Davis. Lula was united in marriage to Donald Thomas Feltz on Saturday, March 29, 1958, in Plainfield, IL, and together they shared over 55 years of marriage until his death on Tuesday, September 17, 2013. Early in her life, while living in the Crest Hill, IL, area she worked for several care centers of the area until she became a school bus driver for the Lockport, IL, school system. She drove the bus for several years a dearly loved all the children. In 1985, she and her husband decided to move back to Southern Illinois and Lula began being a caregiver for the elderly until she finally retired in 2013. She attended church at Walnut Hill Baptist Church and Spring Hill Baptist Church both near her home. In her spare time, she enjoyed quilting, making porcelain dolls, working in her flowers, helping on the farm with her husband, watching and feeding the birds and just living in the country. Her family, especially her grandchildren, was a very important part of her life. She always wanted to know about all of their many activities and enjoyed the many time the family all would be together, especially at the holidays. The many memories created will now be cherished by those she leaves behind. She is survived by three sons, Raymond Feltz and his wife, Tina of Crest Hill, IL, Carl Feltz and his wife, Tanya of Marion, and Daniel E. Feltz of Creal Springs; eight grandchildren, Brandy Rae Zacek and husband, Christopher of DeKalb, IL, Raymond Matthew Feltz and Michael Raymond Kendall both of Crest Hill, IL, Maria Ann Swafford and companion, David DeNosky of Marion, Whitney Renee Feltz and fiancé, Justin Steckenrider of Marion, Lara Lyn Feltz and fiancé, Charlie Robertson of Marion, David Scott Feltz and Tyler Jon Feltz both of Lockport, IL; nine great grandchildren, Damen Swafford, Cierra Lopez, Liam Eugene Green, Taylar Feltz, Kayla Kendall, Emma Kendall, Aubrey Feltz, Holden Robertson and Trace Steckenrider; sister, Pearl Kirman of Plainfield, IL; two sisters-in-law, Betty Davis of Paulton, IL and Linda Davis of Marion, other extended family and many friends. She was preceded in death by her parents, husband; son, David Feltz on October 23, 2019; four sisters, infant Wilma Davis, Alma Kelly, Dortha Bailey and Reba Bernard and five brothers, William Davis, Johnny Davis, Kenneth Davis, James Davis and Edward Davis. Arrangements have been entrusted to Wilson-McReynolds Funeral Home, 900 North Court Street, Marion, IL. Due to the executive order by the Governor of Illinois, those attending the visitation and funeral service inside, must wear a face mask and practice social distancing. The visitation will be on Saturday, September 4, 2021, from 9:30 a.m. to 12:00 noon at the funeral home. Following the visitation, the funeral service will be at 12:00 p.m. with Pastor Jerry Schell presiding. The family requests for those who prefer, memorial contributions be given to “Hospice of Southern Illinois.” Memorial contributions may be mailed in care of Wilson-McReynolds Funeral Home, 900 N. Court Street, Marion, IL, 62959. Memorial envelopes will be available at the funeral home. For additional information call the funeral home at 618-993-2131.

The family of Lula Bell Feltz created this Life Tributes page to make it easy to share your memories.

Send flowers to the Feltz family.