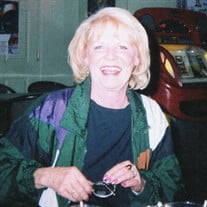 Marcella Mick, age 66, of Marion, IL passed away suddenly at 3:25 a.m. on Sunday, March 27, 2016, in Heartland Regional Medical Center of Marion. She was born on Tuesday, March 29, 1949, in Carmi, IL the daughter of Bill and Margie (Fulkerson) Sneed. Marcella’s working career was as a beautician, working from her home in Marion for many years, until she moved to Columbia, MO in the early 1990’s. While living in Columbia she worked as a coordinator for Section 8 Housing until her health declined and forced her to move back to Marion several years ago to be near her two daughters. In her spare time she enjoyed gardening, sitting outside and watching her watching birds and was an avid reader. Her family was an important part of her life and always enjoyed the many times they spent together. The memories that have been created will now be cherished by those she leaves behind. She is survived by her two daughters, Nicole McClusky and Richelle Mick both of Marion; mother, Margie Burnett of Norris City, IL; four grandchildren, Tomi Jo Mick of Champaign, IL, Taylor Wall of Dayton, OH, Samuel McClusky of Eldorado, IL and Benjamin Chapman of Marion; sister, Suella Zeimet of Harrisburg, IL; two brothers and one sister-in-law, Bill and Carolyn Sneed of Morton, IL and Darrel Gene Burnett of Eldorado, IL; special niece, Kristen Sneed of Morton, IL, several other nephews, other extended family and many friends. She was preceded in death by her father and sister, Diane McGuire. Arrangements for Marcella Mick have been entrusted to Wilson-McReynolds Funeral Home, 900 N. Court St., Marion, IL. In accordance with her wishes, cremation will be accorded with no services held. For those who prefer, memorial contributions may be made to “The American Cancer Society” and mailed in care of Wilson-McReynolds Funeral Home, P.O. Box 370, Marion, IL 62959. For additional information please contact the funeral home by calling 618-993-2131.

Marcella Mick, age 66, of Marion, IL passed away suddenly at 3:25 a.m. on Sunday, March 27, 2016, in Heartland Regional Medical Center of Marion. She was born on Tuesday, March 29, 1949, in Carmi, IL the daughter of Bill and Margie (Fulkerson)... View Obituary & Service Information

The family of Marcella Mick created this Life Tributes page to make it easy to share your memories.

Marcella Mick, age 66, of Marion, IL passed away suddenly at...

Send flowers to the Mick family.