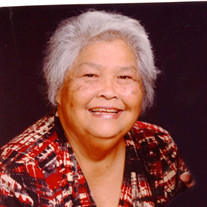 Maria “Bella” Sevilla Li, age 74, of Marion, IL passed away peacefully with her family by her side at 10:30 a.m. on Friday, July 27, 2018 in Herrin Hospital of Herrin, IL. She was born on Tuesday, April 4, 1944 in Cebu City, Philippines the daughter of Gaudioso and Matilde (Guanson) Remedio. She grew up in a loving family with one brother and two sisters. After graduating from Abiliana High School, she attended San Carlos University and San Jose Recoletes University both in Cebu and earned a Bachelor’s of Science in both Education and in Home Economics. It was in her first year in college she met Augustine Li, a faculty member of both schools. Their relationship grew and four years later they were married on December 4, 1965 in Cebu City and together they shared over fifty-two happy years of marriage. She taught English in Cebu City until 1974 when the family came to the US to perform missionary work at the Sioux Indian Mission in St. Francis, South Dakota. Bella taught English and the Natural Sciences while Gus worked as a Health Services Coordinator between the Sioux Tribe and the government Health Agencies where they immensely enjoyed the people and the wild outdoors. In 1997, the family moved to Minot, North Dakota where Dr. Li completed his post-graduate training in family practice. After completing his education they moved to Mandan, North Dakota where Dr. Li opened his health clinic. In 1984, the US Air Force made an offer: “Join the force and see the world for free.” The family started moving again from Okinawa, Japan, the Philippines, Germany, South Korea and Guantanamo. During these years Sevilla taught Dress Making, Macramé, Ceramics and Quilting. While in Germany, she also took the job as director of a Child Development Center in Wiesbaden. Their last move was to Marion in 2004. Bella and Gus take great pleasure in gardening and are both certified Master Gardeners by the University of Illinois Extension Program. We welcome her to God’s garden and wish her happiness in the Lord’s Paradise. She was a member of St. Joseph Catholic Church in Marion and was a member of the Marion Garden Club. She was a great cook and was an avid fisherman. While in South Dakota she caught an 8 pound 3 ounce trophy Bass and a 14 pound Northern Pike. She will be missed by all who knew and loved her and they will cherish their many happy memories. She is survived by her husband, Dr. Augustine F. “Gus” Li of Marion; two daughters, Theresa Shively and husband, Mark and Mary Jean Li all of Marion; two grandsons, Jeffrey Shively and his wife, Andrea and Erik Shively all of Marion; other extended family, and many friends. She was preceded in death by her parents and her brother, Democrito Remedio. Arrangements for Maria “Bella” Sevilla Li were entrusted to Wilson-McReynolds Funeral Home, 900 North Court Street, Marion, IL. The visitation was from 5:00 p.m. until 7:00 p.m. on Wednesday, August 1, 2018, at the funeral home. During the visitation a “Reflection of Life” DVD memorial tribute was presented to the family and friends and featured special people, places, and events of Bella’s life. The funeral mass was at 11:00 a.m. on Thursday, August 2, 2018 at St. Joseph Catholic Church located at 600 North Russell Road, Marion, IL with Rev. Father Richard Mohr presiding and Father Brian Barker assisting. Special musical selections presented during the service were “You Are Mine,” “Sheperd Me, O God,” “There Is a Longing,” “I Received the Living God,” “Song of Farewell,” and “Love Divine, All Loves Excelling” as congregational hymns all by Cantor, Patricia Lynn accompanied by Pianist, Melissa Bound. Special vocal musical selection presented during the servcie was “Ava Maria” by Cantor, Patricia Lynn and Pianist, Melissa Bound. Following the funeral mass the family and friends gathered at St. Joseph Catholic Church for a meal and continued time of fellowship and support. For those who preferred, memorial contributions were made to “Hospice of Southern Illinois”, and mailed in care of Wilson-McReynolds Funeral Home, 900 N. Court St., Marion, IL 62959. Memorial envelopes were available at the funeral home. For additional information call the funeral home at 618-993-2131.

The family of Maria "Bella" Sevilla Li created this Life Tributes page to make it easy to share your memories.

Send flowers to the Li family.