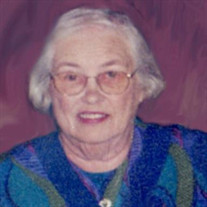 Marian Ruth Mauzy, age 95, of Marion, IL, formerly of Johnston City, IL, passed away peacefully at 6:25 p.m. on Tuesday, April 7, 2020, in the Sunshine Gardens Care Center of Marion. She was born on Monday, December 8, 1924, at home of rural Johnston City in Williamson County, IL, the daughter of John and Etta (Logan) Fletcher. Marian attended school in Johnston City and was a graduate of Johnston City High School Class of 1943. She was united in marriage to Kenneth Mauzy in 1946, in the state of Mississippi and together they shared 60 years of marriage until his death in 2006. Marian’s working career was a Federal Inspector of Ammunitions as a government contractor from 1951 until her retirement in 1967. She was a longtime member of First Baptist Church of Johnston City. When she was young she played softball on a semi-pro softball team as a pitcher traveling all over the Midwest. She also loved to watch baseball and was a devoted St. Louis Cardinal fan. In her spare time she enjoyed traveling, fishing and spending time outdoors. Since she had no children she loved her extended family and always looked forward to the times they all would share together. The many memories created will now be cherished by those she leaves behind. She is survived by her brother and sister-in-law, Jack and Pat Fletcher of Marion, a host of nieces and nephews, other extended family and many friends. She was preceded in death by her parents, husband; four sisters and three brothers-in-law, Helen and John Baker, Audrea and Carl Brown, Rose and Delmer Mitchell and Ruby Kay and Ernie Bozarth and two brothers and one sister-in-law, Virgil and Violet Fletcher and Cecil Fletcher. Arrangements have been entrusted to Wilson-McReynolds Funeral Home, 900 N. Court St., Marion. DUE TO HEALTH CONCERNS RELATED TO THE COVID-19 VIRUS AND BY THE SIGNING OF EXECUTIVE ORDER BY THE ILLINOIS GOVERNOR, there will not be visitation or funeral services. The graveside committal service will be at 11:00 a.m. on Tuesday, April 14, 2020, in Herrin City Cemetery of Herrin, IL with Pastor Larry Stevens presiding. Interment will follow next to her husband, Kenneth. For those who wish, memorial contributions may be made to either/ or “First Baptist Church” of Johnston City and/or “Hospice of Southern Illinois”. Memorial contributions may be mailed to the Wilson-McReynolds Funeral Home, 900 North Court St., Marion, IL 62959. For additional information call the funeral home at 618-993-2131.

Marian Ruth Mauzy, age 95, of Marion, IL, formerly of Johnston City, IL, passed away peacefully at 6:25 p.m. on Tuesday, April 7, 2020, in the Sunshine Gardens Care Center of Marion. She was born on Monday, December 8, 1924, at home of rural... View Obituary & Service Information

The family of Marian Ruth Mauzy created this Life Tributes page to make it easy to share your memories.

Send flowers to the Mauzy family.