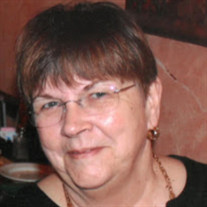 Marilyn Bouhl, age 75, of Marion, IL, formerly of Carbondale, IL, passed away peacefully at 9:30 p.m. on Friday, November 29, 2019, at her home. She was born on Monday, August 21, 1944, in El Paso, TX, the daughter of John Walter and Miriam Irene (Collins) Horn. After graduation from high school, Marilyn attended Oklahoma State University. Marilyn was united in marriage to David Robert Bouhl on Saturday, March 23, 1968, in Midwest City, OK, and together they have shared over 51 years of marriage. Her working career early in her lifetime was in logistics at Tinker Airforce Base in Oklahoma City, OK, and later as a Legal Secretary in Bloomington, IL. Then in 1983, she opened and operated Indian Creek Kennel, located on Giant City Road south of Carbondale, for 15 years until her retirement in 1998. She was of the Protestant faith. In her spare time, she enjoyed researching genealogy, quilting, reading, fishing and spending time outdoors. She also enjoyed Micro Sprint Racing and often volunteered at the raceway located east of Marion. She loved traveling and especially going on cruises. Her family was a very important part of her life and loved the many times they all would be together and was always interested in all of their many different activities. The many memories that have been created will now be cherished by those she leaves behind. She is survived by her husband, David R. Bouhl of Marion; two sons and daughters-in-law, Greg and Crystal Bouhl of Carterville, IL and Gary and Megan Webb Bouhl of Marion; granddaughter, Olivia Grace Bouhl of Carterville; grandson, Spencer Gregory Bouhl of Carterville; brother and sister-in-law, Dale and Kathy Horn of Wesley Chapel, FL, other extended family and many friends. She was preceded in death by her parents. Arrangements have been entrusted to Wilson-McReynolds Funeral Home, 900 N. Court St., Marion. The visitation will be from 4 until 7pm on Friday, December 6th, 2019, at the funeral home. Following the time of visitation, the memorial service will be at 7:00pm with Phil Webb and Pastor Kerry Cox presiding. In leu of flowers, the family has requested that memorial contributions be made to “Hospice of Southern Illinois” and/or “St. Jude Children Hospital” and mailed in care of Wilson-McReynolds Funeral Home, 900 N. Court Street, Marion, IL 62959. Memorial envelopes will be available at the funeral home.

The family of Marilyn Bouhl created this Life Tributes page to make it easy to share your memories.

Send flowers to the Bouhl family.