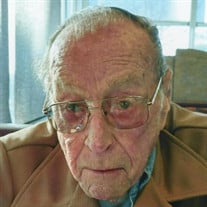 Marion W. Johns, age 89, of Marion, IL, passed away peacefully at 4:30 a.m. on Thursday, October 24, 2019, in Herrin Hospital of Herrin, IL. He was born on Sunday, February 16, 1930, in Creal Springs, IL, the son of Dempsey and Frieda Lee (Webb) Johns. Marion attended school in Crab Orchard, IL and was a graduate of Crab Orchard High School Class of 1947. After graduation he answered the call of this nation by enlisting in the United States Navy in 1947. He was stationed in Hawaii and was part of the military guard assigned to the USS Arizona. After his period of faithful service he was honorably discharged. Marion was united in marriage to Carol Lee Dalton on Sunday, May 7, 1950, in Piggott, Arkansas, and together they shared over 65 years of marriage until her death on Wednesday, December 9, 2015. His working career was as an Electrician. He began working with Nasland Electrical of St. Louis, MO, for about 10 years and later with Brown & Columbo Electrical of Herrin, IL, for 17 years until he retired in 1992. After his retirement he worked from time to time on smaller jobs when being called by the union. Marion was of the Protestant faith and a member of the IBEW Local Union No. 702. When he was younger, he enjoyed hunting and fishing with his brothers and close friend Jimmy Cosby. He taught his son, Wesley how to shoot at an early age and they spent many hours together outdoors. He also enjoyed listening to the older country music and watching the Grand Ole Opry on television and trading knives. He enjoyed spending time with his family, especially his grandchildren, great grandchildren and great-great grandchildren and was always interested in all of their many activities. The many memories created will now be cherished by those he leaves behind. He is survived by two sons and daughter-in-law, Wesley L. and Thresa (Raglin) Johns and Allen D. Johns all of Marion; two grandchildren, Wesley E. Johns and his wife, Courtney of Crab Orchard and Melissa J. Hentz and her husband, Jeremy of Herrin; three great grandchildren, Ashley Johns, Riley Johns and Kelly Fear and her husband, Noah all of Crab Orchard; two great-great grandchildren, Nash and Noxx Fear both of Crab Orchard who he thought were the most beautiful babies ever born; brother, Tommy Johns of Troy, IL; two sisters-in-law, Wanda Dalton and Geraldine Bloodworth both of Marion, other extended family and many friends. He was preceded in death by his parents, wife, three sisters, Kathryn Wall, Olie May Scanlon and Laverne Forcelledo and three brothers, Donald Eugene Johns, Raymond Johns and Dempsey Johns. Arrangements have been entrusted to Wilson-McReynolds Funeral Home, 900 N. Court St., Marion. The visitation will be from 11:00 a.m. to 1:00 p.m. on Monday, October 28, 2019, at the funeral home. Following the time of visitation, the funeral service will be at 1:00 p.m. with Rev. James Slone presiding. Interment will follow next to his wife in County Line Cemetery near Creal Springs. Military honors will be accorded at cemetery by members of Heyde-Pillow V.F.W. Post No. 1301 of Marion, and members of the United States Navy Funeral Honors Burial Detail. For those who prefer, memorial contributions may be made to “The American Cancer Society” and mailed in care of Wilson-McReynolds Funeral Home, 900 N. Court Street, Marion, IL 62959. Memorial envelopes will be available at the funeral home. For complete family and obituary information or to leave an online condolence of memory please visit our website at www.wilsonmcreynolds.com or for additional information call the funeral home at 618-993-2131.

The family of Marion Wesley Johns created this Life Tributes page to make it easy to share your memories.

Send flowers to the Johns family.