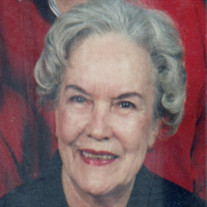 Marjorie Mae Craig Samay, age 101, of Marion, IL, passed away peacefully with her family by her side, at 6:50 p.m. on Wednesday, January 17, 2018, in Heartland Regional Medical Center of Marion, IL. She was born on Monday, August 14, 1916, in Herrin, IL the daughter of William Edgar and Violet (Lauder) Padgett. Marjorie lived in Carterville, IL when she was young, and later her family moved to the Paulton, IL area where she attended school in Crab Orchard, IL and was a graduate of Crab Orchard High School. She was first married to Charles Frederick Craig in Tupelo, MS and to this union two children were born; Barbara and Candace. They enjoyed many years of marriage until his death in March of 1980. She later was united in marriage to Joe Samay in 1985, in Marion. They moved to Sebring, FL and enjoyed two years of marriage until his death in 1987. Marjorie remained in Sebring for two more years until she returned to Marion in 1989. Marjorie was a homemaker the majority of her lifetime. She enjoyed managing her home and seeing to the needs of her family. During her marriage to Charles, who worked for the United States Federal Prison System, the family moved many times with his job advancement. Having lived in Arizona, Washington, California, Indiana and Oklahoma, until they returned to Marion in 1962, when Charles began working at the Marion Federal Prison. She was a member of the Zion United Church of Christ in Marion for many years. In her spare time she enjoyed cooking, reading, and was an avid St. Louis Cardinal fan. She loved spending time with her family and enjoyed the many times they had together. The memories that have been created will now be cherished by those she leaves behind. She is survived by two daughters, Barbara McAlister and Candace Lewis both of Marion; five grandchildren, Christie Isbell and husband Tony Ray of Marion, Kevin McAlister and Gayle McNary of Belleville, IL, Toni Leigh Shoukletovich and her husband Shawn of Marion, Craig Boatright of Benton, IL and John Lewis and his wife Rendee of Palatine, IL, eleven great grandchildren, other extended family and many friends. She was preceded in death by her parents and two sisters, Alma Fiscus and Christina Craddock. Arrangements for Marjorie M. Craig Samay were entrusted to Wilson-McReynolds Funeral Home, 900 N. Court St., Marion. The visitation was from 10:00 a.m. until 11:00 a.m. on Saturday, January 20, 2018, at Zion United Church of Christ, located at 930 West Cherry Street in Marion. Following the time of visitation the memorial service was at 11:00 a.m. with Pastor John Holst presiding. Others participating in the service were great granddaughter Caitlin Isbell and grandson John Lewis who read scripture and great grandson Chase Isbell who assisted Randy Jones in the tolling of the church bell 101 times to represent Marjorie’s age. The prelude and postlude musical selections were presented by organist, Doris Anderson. Following the service the family and friends had a meal and continued time of fellowship at the church. Interment took place next to her first husband Charles F. Craig on Tuesday, January 23, 2018, at 10:00 a.m. in Oakwood Cemetery of Carterville, IL. For those who preferred, memorial contributions were made to “Zion United Church of Christ,” and mailed in care of Wilson-McReynolds Funeral Home, 900 N. Court St., Marion, IL 62959. Memorial envelopes were available at the church and funeral home. For additional information please call the funeral home at 618-993-2131.

The family of Marjorie Mae Craig Samay created this Life Tributes page to make it easy to share your memories.