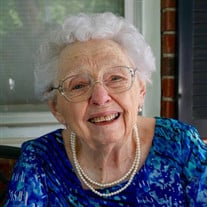 Marjorie R. Davidson, age 92, of Marion, IL, went to be with her Lord and Savior, at 7:37 a.m. on Saturday, October 30, 2021, in Herrin Hospital of Herrin, IL, with her family nearby. She was born on Thursday, September 26, 1929, in Des Plaines, IL, the daughter of Theodore Henry and Rose Caroline (Bloese) Goebbert. Marjorie attended school in Des Plaines and was a graduate of Maine Township High School (Class of ’47). She continued her education and received her Bachelor’s Degree from Grant Hospital of Chicago School of Nursing in 1953, after which she had a career as a registered nurse in Illinois, Michigan, and Montana. She was united in marriage to John Thompson Davidson on April 30, 1955, in Des Plaines, IL, and together they shared over 48 years of marriage until his death on September 23, 2003. She has been a stalwart member of Zion United Church of Christ since moving to Marion from Miles City, MT, in 1975, previously serving as Martha Circle President and as the Coordinator of the “Lunch Bunch.” Marjorie was a tireless community servant and was actively involved in both the Eastern Star and White Shrine organizations for many years. When her children were younger, she was a Cub Scout Den Mother and a Brownie Scout Leader. Some of her leadership roles include serving as Worthy Matron of the Order of the Eastern Star LeRoy A Chapter #350, Worthy High Priestess of Dorcas Shrine #61 of the White Shrine of Jerusalem, Marion Women’s Club President, and the Advisory Board of the Rainbow Girls Order #98 of Marion. She thoroughly enjoyed being part of the Little Egypt Chapter #1 Red Hatter Society. Although her service duties kept her busy, Marjorie also found time to enjoy gardening, quilting, cross stitch, sewing, bird-watching (especially hummingbirds), rock-collecting, and baking. All who knew Marjorie will remember her as a devoted and loving wife, mother, grandmother, great-grandmother, friend, and neighbor. Her twinkling eyes and vibrant smile are already missed. She is survived by her son and daughter-in-law, Thomas and Diane Davidson of Butler, NJ; two daughters, Carolyn Davidson and Elizabeth Davidson both of Marion; five grandchildren, Stacy Davidson and her husband, Joseph of Kansas City, MO, Melanie Davidson of Butler, NJ, Andrew Davidson and his wife, Cheryl of Boonton Township, NJ, Sara Tanner and her husband, Sean of Bel Air, MD and Joshua Davidson and his wife, Michelle of Manville, NJ; two great grandchildren, Declan and Iris Tanner both of Bel Air, MD; two sisters, June Gallagher of La Grange, IL and Geraldine Soenksen of Ottawa, IL; two brothers and sisters-in-law, Harold and Jill Goebbert of Rolling Meadows, IL and David and Kim Goebbert of Spokane, WA; two sisters-in-law, Corrine Goebbert of Des Plaines, IL and Ruth Goebbert of Arlington, Heights, IL; brother-in-law Richard (Dick) Davidson of Marshall, MI, other extended family and many friends. She was preceded in death by her parents, husband, and three brothers, Theodore, Robert, and Henry Goebbert, as well as special friend, Wilma Dudley. Arrangements have been entrusted to Wilson-McReynolds Funeral Home, 900 North Court Street, Marion, IL. Interment will be as a private family service, next to her husband, in Rose Hill Cemetery of Marion, IL, with Pastor John Holst presiding. Due to current health concerns of the pandemic, a public “Celebration of Life” service will be announced next year. Memorial contributions may be given to the “Zion United Church of Christ Memorial Fund” and/or “Eastern Star Scholarship Fund” and mailed in care of Wilson-McReynolds Funeral Home, 900 N. Court Street, Marion, IL, 62959. Memorial envelopes are also available at the funeral. For additional information call the funeral home at 618-993-2131.

The family of Marjorie Rose Davidson created this Life Tributes page to make it easy to share your memories.

Send flowers to the Davidson family.