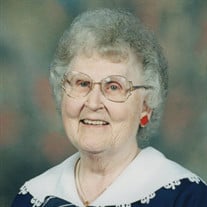 Martha I. Johnson, age 94, of Marion, IL and formerly of Portage, MI, passed away peacefully at 3:35 a.m. on Sunday, October 23, 2016 in Shawnee Christian Nursing Center in Herrin, IL. She was born on Wednesday, December 7, 1921, in Otsego, MI the daughter of Fred Winfield and Pearl Isabelle (Keefer) Nichols. Martha grew up in Otsego, MI and was a graduate of Otsego High School Class of 1939. Before she completed her education she was united in marriage to Fred Bertil Johnson on Friday, December 26, 1941, in Otsego, MI and together they shared over 71 years until his death on Friday, October 26, 2012. She continued her education and received her Master’s degree in Music Education from West Michigan University in Kalamazoo, MI. After receiving her degree, Martha taught music for sixteen years in the Lake Center Elementary School in Portage, MI. In the early years of her teaching she worked for AT&T, testing communication equipment for the United States Military. She was a talented musician and for many years was the organist and pianist for the Sponable Funeral Home in Otsego, MI. After retirement Martha and Fred became associated with the Wickliffe Bible Association Mission and for six years served in Columbia, South America where Fred worked improving Columbia’s telephone and communications system while Martha served with the Columbian Missionary Youth. Martha was a member of the First Church of God of Portage, MI and after moving to Marion attended at Lake of Egypt Christian Church. She is survived by her three daughters and sons-in-law, Karen Shupp of White Pigeon, MI, Christine and James Pingel of Kalamazoo, MI and Anna and Rick Myers of Mishawaka, IN (South Bend, IN); three sons, and daughters-in-law, Bert and Brenda Johnson of Marion, IL, Brian and Maryann Johnson of Torrance, CA and Timothy and Cleo Johnson of Garden Grove, CA, fifteen grandchildren and twenty seven great-grandchildren, other extended family members and many friends. She was preceded in death by her parents; husband, Fred; son, Roland Johnson; sister, Doris Smalla and two brothers, Fred and William Nichols Arrangements for Martha I. Johnson were entrusted to Wilson-McReynolds Funeral Home, 900 N. Court St., Marion, IL. The visitation was from 2:00 p.m. until 3:00 p.m. on Sunday, November 6, 2016, at the funeral home. During the time of visitation a “Reflection of Life” DVD Memorial Tribute featuring special people, places and events in Martha’s life was presented to the family and friends. Following the time of visitation the funeral service was at 3:00 p.m. with Rev. Leroy Waggoner presiding. Comments of memory were presented by Martha’s sons Bert and Tim Johnson and great grandson Jacen Johnson. The prelude and postlude musical selections presented were recorded piano selection. Special recorded vocal musical selections presented during the service were “Because He Lives” and “Blessed Assurance.” Special vocal selection presented acapella during the service was “Amazing Grace” by Martha’s granddaughter Analyse Gallagher. Following the service the family and friends gathered at Lake of Egypt Christian Church for meal and continued time of fellowship and support. Interment was next to her husband in Mount Ever-Rest Memorial Park of Kalamazoo, MI, on Wednesday, November 9, 2016. For additional information please contact the funeral home by calling (618)993-2131.

Martha I. Johnson, age 94, of Marion, IL and formerly of Portage, MI, passed away peacefully at 3:35 a.m. on Sunday, October 23, 2016 in Shawnee Christian Nursing Center in Herrin, IL. She was born on Wednesday, December 7, 1921, in Otsego,... View Obituary & Service Information

The family of Martha I. Johnson created this Life Tributes page to make it easy to share your memories.