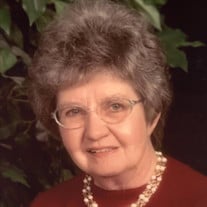 Martha E. Pogue, age 86, of Marion, IL, formerly of Decatur, IL, passed away peacefully at 7:15 a.m. on Saturday, September 18, 2021, in Parkway Manor of Marion, IL. She was born at home on July 7, 1935, in the area known as West End, located between Thompsonville and Galatia, IL, the daughter of Edward Lee and Beulah (Gill) Odle. Martha attended school in Thompsonville and was a graduate of Thompsonville High School Class of 1953. She was united in marriage to Jerald Don Pogue on July 25, 1953, in the Thompsonville Baptist Church of Thompsonville, IL, and together they have shared over 68 years of marriage. Martha’s working career was as an Executive Secretary for the Vice President of Staley Manufacturing of Decatur, for about 25 years. In 1991, she moved to Southern Illinois and bought a home at the Lake of Egypt, located south of Marion. After several years they decided to sell the home on the lake and moved to the southern edge of Marion. She was a member of Aldersgate United Methodist Church of Marion. In her spare time, she enjoyed reading, going out to eat and traveling. She loved the beach and had made several trips to beaches in Florida, South Carolina and Hawaii. Another special trip was to Niagara Falls where she enjoyed celebrating her 25th wedding anniversary. She is survived by her husband, Jerald D. Pogue of Marion; son and daughter-in-law, Jerald Lee and Ellen Pogue of DuQuoin, IL; grandson, Aaron Kellerman of DuQuoin, IL and his fiancé, Melissa Hawkins of Tucson, AZ; granddaughter, Tessa Menefee of Chester, IL, five great grandchildren, other extended family and many friends. She was preceded in death by her parents. Arrangements were entrusted to Wilson-McReynolds Funeral Home, 900 North Court Street, Marion, IL. The visitation was on Wednesday, September 22, 2021, from 9:30 a.m. to 11:00 a.m. at the funeral home. Following the visitation, the funeral service was at 11:00 a.m. with Pastor Lance Leeds presiding. The prelude and postlude musical selections were presented by pianist, Judy Hopkins. Special vocal musical selections presented during the service were; “He Touched Me” and “Amazing Grace” both by vocalist, Corryne Shaw with pianist, Judy Hopkins accompanying. Interment followed in Pleasant Valley Cemetery located southeast of Thompsonville, IL. Pallbearers were Bob Donaldson, Ben Houghland, Aaron Kellerman and Jerald L. Pogue. Following the committal service at the cemetery the family and friends gathered at O’Charley’s Restaurant of Marion for a meal and continued time of fellowship and support. The family requested for those who preferred, memorial contributions be given to “Aldersgate United Methodist.” Memorial contributions were mailed in care of Wilson-McReynolds Funeral Home, 900 N. Court Street, Marion, IL, 62959. For additional information call the funeral home at 618-993-2131.

The family of Martha E. Pogue created this Life Tributes page to make it easy to share your memories.

Send flowers to the Pogue family.