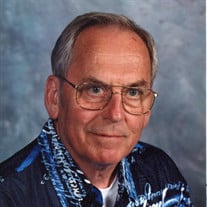 Marvin Walter David Ball, age 83, of Marion, IL, passed away peacefully with his family by his side at 4:10 a.m. on Friday, September 14, 2018, at his home. He was born on Monday, May 13, 1935, in Des Plaines, IL the son of Henry “Harry” and Elsie Alicia (Pries) Ball. Marvin attended school in Park Ridge, IL and was a graduate of Maine Township East High School Class of 1953. He was first united in marriage Marilyn Book and to this marriage a daughter, Sharon was born. He later was united in marriage to Elaine Kowalski and later to Beth Hoole on May 28, 1999, in the Heartland Christian Church of Marion and together they have shared over 19 years of marriage. His working career was as a career electrician. Early in his career he worked for Kelso-Burnett Electrical Contracting of the northwest Chicago suburbs. He later worked as a lead electrician for Argo Corn Products of Summit, IL until his retirement in 1997. After his retirement he moved to Southern Illinois and built a home on the Lake of Egypt south of Marion. He enjoyed living on the lake for the next 19 years. He was a very active member of Heartland Christian Church of Marion. He also was a member of the National Rifle Association. Marvin was an avid hunter and fisherman and also enjoyed golfing, boating, water skiing and was a master wood-worker. He has made many different furniture items for his family and friends. He also owned and operated a charter fishing service on Lake Michigan, based out of Waukegan Harbor for many years, the name of his boat being the “Me Too”. He was an avid Chicago Cubs fan. He also enjoyed working in his yard and around his home. He loved his family and cherished the many times they spent together. He was always interested in all of the many activities, especially those of his grandchildren. The many memories that have been created will now be cherished by those he leaves behind. He is survived by his loving wife, Beth (Hoole) Ball of Marion; daughter and son-in-law, Sharon Ball and Roger Young of Davis, CA; three grandchildren, Anders Young, Elsa Young, and Adrianna Young; stepson, Russell Mars of San Bernardino, CA; brother and sister-in-law, Charles and Carrie Lee Ball of Hendersonville, NC, other extended family, and many friends. He was preceded in death by his parents and his first two wives. Arrangements were entrusted to Wilson-McReynolds Funeral Home, 900 North Court Street, Marion, IL. The time of visitation was from 5:00 p.m. to 8:00 p.m. on Friday, September 21st, at the funeral home. Visitation resumed at 10:00 a.m. until 11:00 a.m. on Saturday, September 22, 2018, at Heartland Christian Church, located at 900 East Boyton Street in Marion. Following the time of visitation the funeral service was at 11:00 a.m. with Pastor Greg Gibbs presiding. The prelude and postlude musical selections were by pianist, Justin Nehrkorn. Special vocal musical selections presented during the service were “This is My Father’s World” and “It Is Well with My Soul” both by Justin Nehrkorn who accompanied himself on the piano. Special comments of memory were presented by Marvin’s daughter, Sharon Ball and granddaughter, Adrianna Young. Interment followed in Rose Hill Cemetery of Marion. Those serving as pallbearers were Russ Mars, Rick Owens, Mike Darter, Lynn Bruce, Norman Brown, and Cliff Baker. Following the graveside committal service at the cemetery family and friends gathered back at Heartland Christian Church for a meal and continued time of fellowship and support. For those who preferred, memorial contributions were made to “Ambleside School of Marion” and mailed in care of Wilson-McReynolds Funeral Home, 900 N. Court Street, Marion, IL 62959. Memorial envelopes were available at the funeral home and the church. For more information call the funeral home at 618-993-2131.

The family of Marvin Walter David Ball created this Life Tributes page to make it easy to share your memories.

Send flowers to the Ball family.