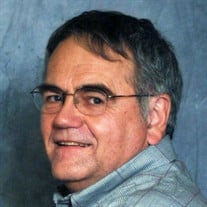 Marvin E. Edwards, age 68, of Springfield, IL passed away suddenly at 5:56 p.m. on Sunday, April 26, 2015, at St. John’s Hospital of Springfield, IL. He was born on Saturday, July 6, 1946, in Thompsonville, IL the son of Bryce and Lucile (Sparks) Edwards. Marvin attended school in Johnston City, IL and was a graduate of Johnston City High School. After graduation he continued his education at Southern Illinois University of Carbondale, IL and St. Louis College of Pharmacy of St. Louis, MO. He was united in marriage to Debra Lynn Milner on Saturday, February 28, 1987, in Marion, IL and together they have shared 28 years of marriage. His working career was with St. John’s Hospital of Springfield, IL until his retirement after 23 years of service. He most recently worked for the State of Illinois. Marvin was a member of the Pharmacy Association, First United Methodist Church and enjoyed gardening, woodworking, auctions and estate sales. He is survived by his wife, Debra L. Edwards of Springfield, IL; son, Luke Edwards of Cape Girardeau, MO; daughter, Holly Edwards of Springfield, IL; brother and sister-in-law, Charles and Dorris Edwards of Johnston City, IL; three brothers-in-law, Burkett Milner and his wife, Beverly of Marion, IL , Lee Milner and his wife, Cindy of Springfield, IL, and Darrell Milner and his wife, Sue of Traverse City, MI; sister-in-law, Sandy Babington and her husband, Rick of Carterville, IL; several beloved nieces, nephews, cousins and many friends. He was preceded in death by his parents and brother, Larry Edwards. The time of visitation was between the hours of 4:00 p.m. and 7:00 p.m. on Thursday, April 30th at Kirlin-Egan & Butler Funeral Home, 900 S. 6th St., Springfield, IL. Visitation resumed between the hours of 10:00 a.m. until 12:00 p.m. on Friday, May 1, 2015, at Wilson-McReynolds Funeral Home, 900 N. Court St., Marion, IL. Following the time of visitation the funeral service was at 12:00 p.m. with Rev. Dr. Tim Ozment presiding. The prelude and postlude musical selections were presented by pianist, Judy Hopkins. Special vocal recorded musical selection presented during the service was "You'll Be In My Heart" by Phil Collins. Burial followed at Rose Hill Cemetery. Pallbearers were Danny Edwards, Steve Edwards, Bill Torricelli, Kent Volker, George Trammell and James Milner. After the committal service the family and friends went to Marvin's sister-in-law, Sandra Babington of Carterville, IL for a meal and continued time of fellowship and support. To leave your condolences at the funeral home in Springfield, please visit butlerfuneralhomes.com. For additional information please contact Wilson-McReynolds by calling 618-993-2131.

The family of Marvin E. Edwards created this Life Tributes page to make it easy to share your memories.

Send flowers to the Edwards family.