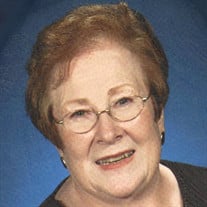 Mary Ann Allen, 85, of Marion and formerly of Eldorado, IL, passed away on November 24, 2020 at Deaconess Hospital in Evansville, IN. She and her twin brother, James M. King, were born on November 14, 1935 in Gideon, MO, to parents James E. and Nadine (Hildebrand) King. Mary Ann was a member of the First Baptist Church of Marion where she formerly taught Sunday School and helped establish the present church library. She graduated from Marion High School in 1954 and started college when her youngest son started Kindergarten. She graduated from Southern Illinois University in Carbondale in 1973 with a degree in education, and taught in Eldorado for many years. She also earned her Master’s Degree at SIU during her teaching career. She moved back to her hometown of Marion in 1985, eventually retired from the Eldorado school district, and started a new career at the Marion Carnegie Library, where she was instrumental in its renovation and children’s library. Mary Ann’s work as a librarian was motivated by her passion for literature and books, a love of which she passed to her children. She was active in her professional sorority, Alpha Delta Kappa, and loved to travel. She was a devoted mother, grandmother, and great grandmother; she always considered her children to be her greatest legacy. Mary Ann is survived by her daughter, Cheryl Johnson (Mark), of Marion, sons James L. Allen (Anne), of Seabrook, TX, Russell E. Allen (Jana), of Coronado, CA, and Gordon L. Allen (Martha), of Pittsburgh, PA; seven grandchildren, Andrea Johnson (Jacob Osterbur) of Cincinnati, OH, Leslie Johnson of Marion, Jeremy Allen of Seabrook, TX, Gregory Allen (Kymberlee) of Houston, TX, Jaymie Allen (Byron Ladd Hoffman) of Houston, TX, and Suzanne and Lily Allen, both of Coronado, CA; and two great-grandchildren, Josie and Julia Osterbur, both of Cincinnati, OH; two brothers, James M. King (Joan) of Bridgeton, MO, and William H. “Bill” King of Klamath Falls, OR; several nieces, nephews, and several great nieces and nephews. Mary Ann was predeceased by her parents, one brother, Ronald “Ronnie” King, and two infant brothers. Arrangements were entrusted to Wilson- McReynolds Funeral Home, 900 N. Court St., Marion and services were private. A memorial service to celebrate her life will be held in Marion at a later date. Donations in her memory should be made to the First Baptist Church of Marion. For more information, call the funeral home at 618-993-2131

Mary Ann Allen, 85, of Marion and formerly of Eldorado, IL, passed away on November 24, 2020 at Deaconess Hospital in Evansville, IN. She and her twin brother, James M. King, were born on November 14, 1935 in Gideon, MO, to parents James E.... View Obituary & Service Information

The family of Mary Ann Allen created this Life Tributes page to make it easy to share your memories.

Send flowers to the Allen family.