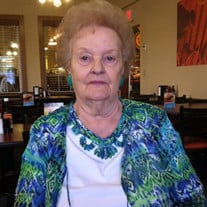 Mary E. Bloodworth, age 91, of Marion, IL, passed away at her home with her family by her side, at 11:15 p.m. on Saturday, April 3, 2021. Mary was born on Wednesday, September 18, 1929, at her home located in the Crenshaw area of Marion, the daughter of Ezra and Edith J. (Fuller) Rodgers. Mary grew up in the Marion area, attended LeMaster’s Grade School and was a graduate of Marion High School Class of 1947. She married her high school sweetheart, Bill Bearden on March 7, 1947 in Tennessee. Bill and Mary, along with several friends rode their motorcycles to Tennessee for the ceremony. This union was blessed with 3 children, Kathie Jean, Debbi and Billy Gene II. Mary was later united in marriage to Clarence Bloodworth on October 8, 1977, in Marion, and together they shared over 14 years of marriage until his death in August of 1991. Early in her lifetime Mary worked as a cashier at Skelly’s Truck Stop in Marion. She later became a Licensed Real Estate Agent and worked for Century 21 Real Estate of Marion, for about 20 years until she retired in her mid 70’s. When she was first married Mary enjoyed driving race cars in the “Powder Puff Derby” at the Marion Fair Grounds. She also enjoyed riding with her husband, Bill on his Harley Davidson Motorcycle and would go on many road trips with other motorcycle friends. Later in life she loved to travel, especially to Las Vegas and would often spend weeks there. She was an amazing cook and enjoyed hosting large family gatherings at her home. The many memories that have been created will now be cherished by those she leaves behind. She is survived by two daughters, Kathie Price and her husband, Ronnie and Debbi Wierman all of Marion; five grandchildren, Crystal Tamayo of CA, Ron Price and wife, Zena of Johnston City, IL, Pete Price and wife, Michelle of Pittsburg, IL, Jared Kearney and Dean Atkinson of Marion, and Rebecca Holmes and husband, James of Owensboro, KY, twelve great grandchildren, three great-great grandchildren, six nieces and nephews, several great nieces and great nephews, other extended family and many friends. She was preceded in death by her parents, both husbands; son, Billy Gene Bearden II; grandson, Mathew David Kearney; two sisters, June Lucker and Nina Baldwin; three brothers, Elmer Rodgers, Edgar Rodgers and Phillip J. “Sock” Rodgers and son-in-law, Steven Wierman. Arrangements have been entrusted to Wilson-McReynolds Funeral Home, 900 North Court Street, Marion. The visitation will be on Sunday, April 11, 2021, from 12:00 p.m. to 2:00 p.m. at the funeral home. Following the visitation, the funeral service will be at 2:00 p.m. with Rev. Roy Pepmiller presiding. Interment will follow in Rose Hill Cemetery of Marion, IL. For additional information call the funeral home at 618-993-2131. DUE TO HEALTH CONCERNS RELATED TO THE COVID-19 VIRUS AND BY THE SIGNING OF EXECUTIVE ORDER BY THE ILLINOIS GOVERNOR, if you are planning on attending the visitation and service it is required you wear a mask and social distance yourself from others.

The family of Mary E. Bloodworth created this Life Tributes page to make it easy to share your memories.

Send flowers to the Bloodworth family.