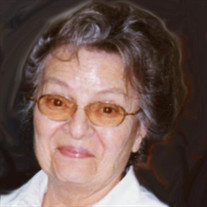 Mary Alice Copher, age 92, of Marion, IL, passed away peacefully at 10:55 P.M. Saturday, December 21, 2019 in Helia Healthcare of Energy, IL. She was born on Wednesday, December 7, 1927, in Marion, IL the daughter of Floyd and Jennie (Lipe) Baggett. Mary Alice grew up and attended school in Marion and was a graduate of Marion High school class of 1945 and was a member of the Third Baptist Church of Marion. Mary Alice was united in marriage to Don Copher on Saturday, June 30, 1945 in Piggott, AR and together they shared over thirty-six years of marriage until his death on Monday, July 20, 1981. She was employed for many years by Allen Industries in Herrin, IL and last worked for Freeman #4 Coal Mine near Pittsburg, IL and was a member of the United Mine Workers of America. In her spare time, she enjoyed volunteering with Shawnee National Forest Service and always loved caring for and rescuing her many pets down through the years. She always contributed to and loved help rescue animals. Her family was a very important part of her life and loved the many times they all would be together and the many memories that have been created will now be cherished by those she leaves behind. She is survived by her daughter, Vicki Fisher of Marion, IL; grandson, Allan Fisher of Marion; six nieces, Cindy Prather, Sherry Baggett Lynch, Carole Pyle, Brenda Barnes, Billy Louise Cousin and Becky Jo Pickett; nephew, Joe Motsinger; her friend and neighbor, Sally Haack; other extended family and many friends. She was preceded in death by her parents; husband, Don Copher; three sisters, Clara Motsinger, Mildred Singleton and Louise Schuman; one brother, Floyd “Pete” Baggett and one nephew John F. Baggett. Arrangements have been entrusted to Wilson-McReynolds Funeral Home, 900 N. Court St., Marion. A time of remembrance and visitation was from 11:00 a.m. until 12:00 pm noon on Monday, December 30th, 2019, at the funeral home followed by a brief memorial service with Lindsey Luehr Presiding. During the time of visitation a “Reflection of Life” DVD Memorial Tribute featuring special people, places and events in Mary’s life was presented to the family and friends. Comments of Memory were Read by Lindsey Luehr on Behalf of Mary’s Nephew, Joe Motsinger and Mary’s Nieces, Carole Pyle and Brenda Barnes. The prelude and postlude musical selections were recorded piano selections. Special recorded vocal musical selections presented during the service were, “Peace In the Valley”, by Elvis Presley, “The Green Green Grass of Home”, by Porter Wagner, “Will The Circle Be Unbroken”, by Willie Nelson and “One Day at a Time”, by Christie Lane. For those who preferred, memorial contributions were made to “Finding Forever Animal Rescue” and can also be mailed in care of Wilson-McReynolds Funeral Home, 900 N. Court Street, Marion, IL 62959. Memorial envelopes were made available at the funeral home. Private inurnment will follow at a later date next to her husband in Maplewood Cemetery of Marion, IL. For additional information call the funeral home at 618-993-2131.

The family of Mary Alice Copher created this Life Tributes page to make it easy to share your memories.

Send flowers to the Copher family.