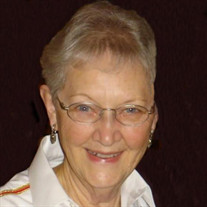 Mary Louise Lefferson, age 91, of Marion, IL, formerly of the Lawrenceville, IL area, passed away peacefully at 12:21 p.m. on Friday, January 14, 2022, in The Anchor of Marion, IL. She was born on February 26, 1930, in Salem, IL, the 3rd child of Waldo and Kathryn (Dreisbach) Boyles, and one of seven children. Mary attended school in Salem and was a graduate of Salem High School Class of 1948. She was united in marriage to Earl Lloyd Lefferson on May 3, 1949, in Grace United Methodist Church of Salem and together they shared over 58 years of laughter and happiness until his death on June 1, 2007. As a mother of two young children, Mary was dedicated to managing the home, garden, and keeping up with her energetic kids. After her children were older, she began working in 1963 as a secretary at Arlington Elementary School in Lawrenceville. She retired in the mid-1970’s. She was a 53-year member of Zion United Methodist Church of Lawrenceville and a former member of the United Methodist Women. Serving others in the name of the Lord brought her fulfillment and happiness. In her spare time, she enjoyed working outside in her yard and gardens, as well as spending time in fellowship with the Zion Church community. She found great joy in being around those she loved. She loved her family and was always interested in all the activities going on in their lives. The many memories created will now be cherished by those she leaves behind. Her family will always remember her warm, caring spirit and contagious laughter. She is survived by her daughter, Patricia Ann Cross and husband, Douglas, of the Lake of Egypt area near Goreville, IL; son, Michael Lynn Lefferson and wife, Cindy, also of the Lake of Egypt area; six grandchildren, Ellen Kathleen Blom (Jason) of Ballwin, MO, Amy Elizabeth Cole (Andy) of Parkville, MO, Emily Frances Reeves (Patrick) of Fort Collins, CO, Anne Marie Alcazar of Alton, IL, Karin Christine Witt (Matt) of Alton, IL and Garrett Benjamin Lefferson (Alyssa) of Wheaton, IL; nine great grandchildren, Paige, Ryan, Mackenzie, Emma, Aldo, Ari, Gustavo, Ashlyn and Claire; brother, Otis Boyles (Rose) of Iuka, IL; two sisters, Barbara Garrison of Salem, IL and Dorothy Skaggs (Daniel) of Kell, IL, other extended family and many friends. She was preceded in death by her parents, husband; brother, James Boyles and two sisters, Lois Williams and Esther Austin. Arrangements are entrusted to Wilson-McReynolds Funeral Home, 900 North Court Street, Marion, IL. A memorial service will be accorded at a later date. The family has requested for those who prefer, memorial contributions be made to either or both; “Zion United Methodist Church” of Lawrenceville, IL and/or “Hospice of Southern Illinois.” Memorial contributions may be mailed in care of Wilson-McReynolds Funeral Home, 900 N. Court Street, Marion, IL, 62959. For additional information call the funeral home at 618-993-2131.

The family of Mary Louise Lefferson created this Life Tributes page to make it easy to share your memories.

Mary Louise Lefferson, age 91, of Marion, IL, formerly of the...

Send flowers to the Lefferson family.