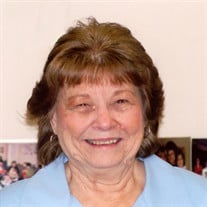 Mary M. Smothers, age 89, of Marion, IL, passed away peacefully with her family near at 5:39 p.m. on Sunday, August 2, 2020, at her home. She was born on Sunday, January 11, 1931, at home in rural Crab Orchard, IL, of Williamson County, the daughter of Lewis Leon and Eunice (Motsinger) Blackwell. Mary was first united in marriage to William Don Smothers on Saturday, July 24, 1948, in Mt. Vernon, IL, and together they shared 22 years of marriage until his death on Saturday, August 15, 1970. She later was united in marriage to Don’s brother, Bobby Lee Smothers, who had never been married, in August of 1971, in Mcleansboro, IL, and together they shared 13 years of marriage until his death on Sunday, August 4, 1984. Her working career began early in her lifetime working for Dr. Baker’s family as their housekeeper and later for the General Telephone Company both of Marion. The majority of her working career was with the Charles Todd Uniform Company that later became Aramark Uniform Services of Marion, as a press operator for 25 plus years until her retirement at age 69. Mary was a Christian and of the Protestant faith. In her spare time, she enjoyed fishing, sewing, working in her flowers, gardening and canning her harvest. She also enjoyed sewing, crocheting, embroidering and spending time vacationing in Florida, she loved the ocean and her many visits to Bush Gardens. Mary was a lifelong “Cub Fan” and enjoyed going out to the Southern Illinois Miners Ball Park in Marion, and watching a game. Mary loved her family and enjoyed spending time with them. She was always interested in all of their many activities, especially those of her grandchildren and great grandchildren. The many memories that have created will now be cherished by those she leaves behind. She is survived by three daughters and son-in-law, Sandy Smothers Swan of Marion, Debbie Smothers Choate and husband, Randy of Ozark, IL and Pamela Smothers Bailey of Marion; son and daughter-in-law, Mike and Sue Smothers of Marion; nine grandchildren, Julie Boles of Marion, Brian Swan of Marion, Laurie Edwards and husband, Chris of Rockford, IL, Lance Choate and wife, Desirea of New Burnside, IL, Crystal LeAnn Marie Mayo and husband, Ramone of Pittsburg, IL, Michael Wayne Smothers and wife, Hannah of Goreville, IL, Stacey Smothers of Carterville, IL, John Michael Smothers of Lehigh Acres, FL and Amanda Sue Roye and husband, Lance of Marion, thirteen great grandchildren, two great-great grandchildren; sister and brother-in-law, Betty Jean and Jackie Bishop of Creal Springs, IL; two brothers and sister-in-law, James Blackwell of Mattoon, IL, and William Ray and Sue Blackwell of Tilden, IL; faithful caretakers, Ronda Davis of Marion and Penny Nickerson of Marion, a host of nieces, nephews, other extended family and many friends. She was preceded in death by parents, both husbands; son, Rickey Don Smothers on July 9, 2011; and grandson, Brandon Alan Bailey on March 13, 1999. Arrangements were entrusted to Wilson-McReynolds Funeral Home, 900 N. Court St., Marion. The time of visitation was from 10:00 a.m. until 1:30 p.m. on Wednesday, August 5, 2020, at the funeral home. During the time of visitation, a “Reflections of Life” DVD Memorial Tribute featuring special people, places and events in Mary’s life was presented to the family and friends. Following the time of visitation the funeral service was at 1:30 p.m. with Pastor Don Colson presiding. Comments of memory were made by Mary’s daughter, Pamela S. Smothers Bailey. The prelude and postlude were recorded piano musical selections. Special vocal musical selections presented during the service were, “Song of Ireland” by Eddie Rabbitt, “Amazing Grace” by Alan Jackson, “The Breath You Take” by George Strait and “Go Rest High on That Mountain” by, Vince Gill. Interment followed next to her first husband in Tanner Cemetery located in the Arnold View Community southeast of Marion, in Williamson County. Pallbearers were Ramone Mayo, Jarred Newman, Michael Wayne Smothers, Blaine Mayo, John Michael Smothers and Randy Choate. For those who preferred, memorial contributions were made to “Hospice of Southern Illinois”. Memorial contributions were mailed to the Wilson-McReynolds Funeral Home, 900 North Court St., Marion, IL 62959. Memorial contribution envelopes were available at the funeral home. DUE TO HEALTH CONCERNS RELATED TO THE COVID-19 VIRUS AND BY THE SIGNING OF EXECUTIVE ORDER BY THE ILLINOIS GOVERNOR, it was recommended if you were planning on attending the visitation or service please wear a mask and social distance yourself from others. For additional information please call 618-993-2131.

The family of Mary M. Smothers created this Life Tributes page to make it easy to share your memories.

Send flowers to the Smothers family.