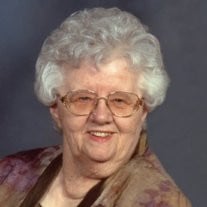 Mary Elizabeth “Betty” Richards, age 89, of Marion, IL passed away at 9:00 p.m. on Thursday, March 21, 2013, in Angel Acres of Marion, IL. She was born on Wednesday, August 22, 1923 in Murphysboro, IL the daughter of Roy and Nell (Breeden) Will. Betty was united in marriage to Thomas Monroe Richards, Jr. on Thursday, January 3, 1946, at Centenary Methodist Church in Murphysboro, IL. Her husband was later called into the ministry and together they served the Lord in many communities of Southern Illinois. Together they shared the next sixty-one years of marriage until his death on September 10, 2007. To this union they were blessed with four children, Michael, Thomas III, Linda and James. She graduated from Murphysboro Township High School with great secretarial skills. She was employed at Anna State Hospital for many years as well as other places. Upon her retirement, Betty was working for the Environmental Protection Agency in Marion, IL. Betty was a member of Aldersgate United Methodist Church of Marion, IL and faithfully attended the church’s “Tuesday Morning Bible Study” until her health declined. Betty and Rev. Tom enjoyed twenty years of retirement together traveling as snowbirds, fishing at Reelfoot Lake, attending church camps and filling in for churches that needed short-term pastoral care. One of their greatest joys was spending time with all their family. She was a special loving, devoted wife, mother, grandmother, great grandmother and friend. She is survived by her daughter and son-in-law; Linda and Mick Daugherty of Dahlgren, IL; three sons and daughters-in-law; Michael and Darlene Richards of Centralia, IL, Thomas III and Jenny Richards of Herrin, IL and James and Joann Richards of Goreville, IL; six grandchildren, Darla Miller and her husband, Brian and Holly Davis and her husband, Andy all of Centralia, IL, Angela Darnell and her husband, Kent of McCleansboro, IL, Eric Daugherty and his wife Jessica of Bluford, IL, Courtney Garner of Anna, IL and Seth Richards of Carbondale, IL and one step grandson David Gooch of Groveland, FL; nine great-grandchildren, Kaleb and Kolby Darnell, Madison and Riley Miller, Grant Davis, Wyatt and Emma Daugherty, Presli and Grayson Garner; brother and sister-in-law, Richard and Rosemary Will of Murphysboro, IL; three sisters-in-law, Elsie DeVardo and her husband, Tom of Marion, IL, Shirley Oetjen and her husband, Marvin of Carterville, IL and Beulah Ferguson of Domotte, IN; brother-in-law, Homer Richards and wife, Ruthann of Murphysboro, IL, several nephews and nieces and many friends. Betty was proceeded in death by her parents, husband; infant son, William Edward Richards; daughter-in-law, Pamela Richards; two brothers, Roy “Bus” Will and Pete Will. Arrangements for Mary Elizabeth “Betty” Richards were entrusted to Wilson-McReynolds Funeral Home, 900 N. Court St., Marion, IL. The funeral service was at 11:00 a.m., Tuesday, March 26, 2013, at Aldersgate United Methodist Church, 1201 N. Fair St., Marion, IL, with Rev. Tim Ozment presiding. Comments of memory were presented by Betty’s good friend, Linda Duncan. The prelude and postlude musical selections were presented by pianist, Sharon Disney. Special vocal selections presented during the service were “How Great Thou Art” by Gary Dooley accompanied by pianist, Sharon Disney, “Welcome to Heaven” by Jimmy Evitts with recorded accompaniment, “In the Garden” as a congregational hymn, led by Gary Dooley and accompanied by pianist, Sharon Disney and “The King is Coming” as a recorded vocal selection by Mark Fisher. Interment followed next to her husband in Pleasant Grove Memorial Park of Murphysboro, IL. Active pallbearers were Brian Miller, Kent Darnell, Eric Daugherty, Andy Davis, David Gooch and Seth Richards. Honorary pallbearer was Kaleb Darnell. After the committal service at the cemetery the family and friends gathered back at Aldersgate United Methodist Church for a meal and continued time of fellowship. The visitation for the family and friends was from 5:00 p.m. until 8:00 p.m. Monday, March 25th, at the funeral home. Visitation resumed at the church after 10:00 a.m. on Tuesday morning and continued until the time of the service. During the time of visitation a “Reflection of Life” DVD Memorial Tribute featuring special people, places and events of Betty’s life was presented to the family and friends. For those who preferred, memorial contributions were made to either “Aldersgate United Methodist Church”, “Hospice of Southern Illinois” or the organization of donor’s choice. Memorial contribution envelopes were available at the funeral home and the church or were mailed in care of Wilson-McReynolds Funeral Home, P.O. Box 370, Marion, IL 62959. For additional information please contact the funeral home by calling 618-993-2131.

The family of Mary Elizabeth "Betty" Richards created this Life Tributes page to make it easy to share your memories.