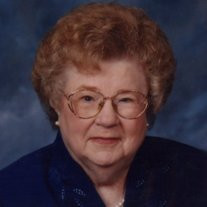 Mary Helen Lollar, age 87, of Marion, IL passed away peacefully at home, with her family by her side at 12:23 a.m. on Monday, May 20, 2013. She was born on Thursday, January 21, 1926, in Harrisburg, IL, the daughter of Louie Stephenson and Nona (Weir) Stephenson. She grew up in Harrisburg and was a graduate of Galatia High School. She later attended college at Brown Business College. Mary Helen was united in marriage to Jewel Lee Lollar on June 5, 1948 in Marion, IL and together they shared over 60 years of marriage until his death on July 4, 2008. In her early working years she was employed as secretary for Fabick Machinery from 1943 through 1950. She later worked for the U.S. Department of Agriculture of Williamson County in the A.S.C.S. office in Marion, IL from 1954 to 1985. She was a long time active member of the Pittsburg Free Will Baptist Church of Pittsburg, IL. She was a kind, generous, hard working, Godly woman, mother, and mama who greatly enjoyed being with family. Mary took pride in caring for her home and supporting her husband Jewel, in his pastoral ministries. She will be dearly missed by all that loved and knew her. She is survived by her two daughters and sons-in-law, Gloria Wall and her husband Kelley, Gayla and Dr. Loren Taylor all of Marion, IL; seven grandchildren, Anita Gentry and husband Brent of Carterville, IL, Erica Blumenstock and husband Joe of Nashville, IL, Chad Wall and Todd Wall both of Marion, IL, Angela Randolph and husband Andy of Marion, IL, Shannon Taylor of Cincinatti, OH and Lindsey Cobb and husband Logan of Marion, IL; ten great-grandchildren, Elizabeth, Hannah & Heidi Gentry, Joseph, Joshua and Jackson Blumenstock, Gunner Wall, Addy, Ashton & Avery Randolph; two sisters-in-law, Opal Stephenson of Marion, IL and Anna Mae Motsinger of Crab Orchard, IL; numerous nephews, nieces, other extended family and many friends. She was preceded in death by her parents, husband and one brother, Marion Stephenson. Arrangements for Mary Helen Lollar have been entrusted to the Wilson-McReynolds Funeral Home, 900 N. Court Street, of Marion, IL. Visitation for family and friends will be on Thursday, May 23, 2013 from 5:00 p.m. until 8:00 p.m. at Wilson-McReynolds Funeral Home. Visitation will resume Friday morning at 10:00 a.m. at Pittsburg Free Will Baptist Church of Pittsburg, IL. The funeral service will be at 11:00 a.m. with Rev. Eddie Donelson presiding. Interment will follow in Mt. Pleasant Cemetery of Poordo, IL. For those who prefer, memorial contributions may be made to “Pittsburg Free Will Baptist Church Building Fund”, “Mt. Pleasant (Poordo) Free Will Baptist Cemetery” or “Hospice of Southern IL”. Memorial contribution envelopes will be available at the funeral home or may be mailed in care of Wilson-McReynolds Funeral Home, P.O. Box 370, Marion, IL 62959. For additional information please call the funeral home at 618-993-2131.

The family of Mary Helen Lollar created this Life Tributes page to make it easy to share your memories.

Send flowers to the Lollar family.