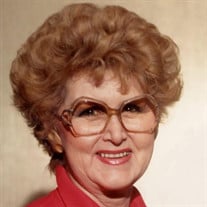 Marzella Collier, age 83, of Marion, IL, passed away at 8:35 p.m. on Monday, April 8, 2019, in Heartland Regional Medical Center of Marion. She was born on Thursday, April 25, 1935, in Hominy, Oklahoma, the daughter of Daniel S. and Nellie (Sweat) McQuary. Marzella was united in marriage to Travis Samuel Collier on Saturday, September 27, 1952, in St. Louis, MO, and together they shared over 63 years of marriage until his death on Monday, January 4, 2016. They made their home in the Chicago, IL area from the mid 1950’s until they moved to Southern Illinois in 1989. While living in the Chicago area, Marzella was a Cosmetologist and owned and operated over time four beauty shops. She also developed her own line of makeup called “Marzella’s Cosmetics” something she was very proud of. In her spare time she enjoyed managing her home and seeing to the needs of her family and traveling with her husband. She was a member of Victory Baptist Church of Carterville where she was actively involved until her health declined. Marzella loved her family and was always interested in all of their many activities. The many memories that have been created will now be cherished by those she leaves behind. She is survived by her son and daughter-in-law, Kevin and Andra Collier of Carterville; two sisters, Murlene Shaw of Fairview Heights, IL and Sharlene Nadler of Union, MO; sister-in-law, Ruth Gross and her husband Chester of Houston, TX, other extended family and many friends. She was preceded in death by her parents, husband and three brothers, Earl Roberson, D.S. McQuary and Kenneth McQuary. Arrangements were entrusted to Wilson-McReynolds Funeral Home, 900 N. Court St., Marion. The time of visitation was from 11:00 a.m. until 1:00 p.m. on Friday, April 12, 2019, at the funeral home. During the time of visitation a “Reflection of Life” DVD Memorial Tribute featuring special people, places and events in Marzella’s life was presented to the family and friends. Following the time of visitation the funeral service was at 1:00 p.m. with Rev. Glen Aulgur and Rev. Tony Edmonds presiding. The prelude and postlude musical selections were presented by pianist, Suzanne Smith. Special vocal musical selections presented during the service were “Sweet Hour of Prayer” and “The Old Rugged Cross” both by vocalist, Julie Aulgur, accompanied by pianist, Suzanne Smith. Interment followed next to her husband in Willowrest Cemetery of Carterville, IL. Pallbearers were Jared Shaw, Lake Norris, Seth Willms, Oscar Roberson, Rev. Tony Edmonds and William Cain. Following the committal service at the cemetery the family and friends gathered at Victory Baptist Church in Carterville, for a meal and continued time of fellowship and support. For those who preferred memorial contributions were made to “Victory Baptist Church” and mailed in care of Wilson-McReynolds Funeral Home, 900 N. Court Street, Marion, IL 62959. Memorial envelopes were made available at the funeral home. For more information please call the funeral home at 618-993-2131.

Marzella Collier, age 83, of Marion, IL, passed away at 8:35 p.m. on Monday, April 8, 2019, in Heartland Regional Medical Center of Marion. She was born on Thursday, April 25, 1935, in Hominy, Oklahoma, the daughter of Daniel S. and Nellie... View Obituary & Service Information

The family of Marzella Collier created this Life Tributes page to make it easy to share your memories.

Send flowers to the Collier family.