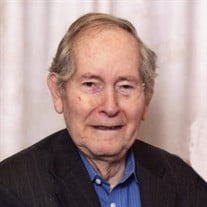 Mason Monroe Wheeler, age 93, of Marion, IL passed away peacefully surrounded by his family, at 11:40 a.m. on Thursday, September 13, 2018, in the Community Living Center of the VA Medical Center of Marion. He was born on Wednesday, April 15, 1925, in Centralia, MO, the son of Roy William and Kitty Ann (Newman) Wheeler. Mason attended school in Centralia and was a graduate of Centralia High School Class of 1943. During the time of WW II, Mason answered the call of this nation by enlisting into the United States Navy-Merchant Marines serving on the USS Battle Mountain and the USS Signal Hills. After his period of faithful service he was honorably discharged in August of 1945, with the rank of Messman. After returning home from service, Mason began his working career installing pipelines for a while. He later began his long career in grocery working for Kroger in Poplar Bluff and as store manager for Kroger in Doniphan, MO, where he won many awards for store improvement. He moved and worked for Kroger in both Paducah, KY and Eldorado, IL. He became a Master Meat Cutter and moved to Marion in 1957, working for several of the area groceries including Foodtown in Vienna and Kroger, Bays and Bracys in Marion, until his retirement in 1996. He was united in marriage to Floy Laville Reed on Saturday, October 2, 1948, in Poplar Bluff, MO and together they have shared nearly 70 years of marriage. He has been a member of Aldersgate United Methodist Church of Marion since 1957. He also was a member of Heyde-Pillow V.F.W. Post No. 1301 of Marion and the International Meat Cutter’s Union. In his spare time he enjoyed fishing, building model airplanes and was a Ham Radio Operator with his call letters being “WA9FOA”. His family was a very important part of his life, and he was always interested in all of their many activities, especially of his grandchildren and great grandchildren. He cherished the many times they all spent together and now those he leaves behind will cherish the many memories that have been created. He is survived by his wife of 70 years, Floy L. Wheeler of Marion; four sons and three daughter-in-law, James and Marjorie Wheeler of Godfrey, IL, Larry and Robinlyn Wheeler of Amity, OR, Michael and Susan Wheeler of Baton Rouge, LA, and Thomas E. Wheeler of Marion; ten grandchildren, Stacey Cecil of Carterville, IL, Jonathan Mason Wheeler of Alton, IL, Christopher Wheeler and his wife Heather of St. Peters, MO, Adam Wheeler and his wife, Danielle of St. Louis, MO, Zachary Wheeler of Portland, OR, Allison Bockmon and her husband Jason of Pflugerville, TX, Amy Wheeler of Galveston, TX, Shelby Wheeler of Chicago, IL, Anne Wheeler of Baton Rouge, LA and David Mason Wheeler of Marion, twelve great grandchildren; brother, Roy William Wheeler, Jr. of Aurora, SD; sister-in-law, Juanita Wheeler of Wichita, KS, other extended family and many friends. Those who preceded him in death were his parents; sister, Joyce Nevitt; and three brothers, Kenneth, Daniel and Gary Wheeler. Arrangements were entrusted to Wilson-McReynolds Funeral Home, 900 North Court Street, Marion, IL. The time of visitation was from 10:00 a.m. to 11:00 a.m. on Friday, September 21st, at Aldersgate United Methodist Church located at 1201 North Fair Street in Marion. During the visitation a “Reflection of Life” DVD Memorial Tribute was presented to the family and friends and featured special people, places, and events of Mason’s life. Following the time of visitation the memorial service was at 11:00 a.m. with Pastor Lance Leeds presiding. The prelude and postlude musical selections were presented by pianist, Judy Hopkins. Special musical selections presented during the service were “In the Sweet Bye and Bye” and “Mansion Over the Hilltop” both as congregational hymns accompanied by Judy Hopkins on the piano. Special instrumental musical selection presented during the service was “God Be With You Till We Meet Again” by grandson, Adam Wheeler, on the cello. Following the service, military honors were accorded at the church by members of Heyde-Pillow V.F.W. Post No. 1301 of Marion, and members of the United States Navy Funeral Honors Burial Detail. Members participating from the V.F.W. were Officer of the Day, Ron Phillips, Chaplin, Ray Hancock, Commander, Dan Fruge, National Colors, Roger Morris, Post Colors, Art Ambros, Color Guard, John Andrew and Herbert Robinson, Bugler, Bill Rice, Sr., and Firing Squad, Gene Broombaugh, Bill Hampsey, Bill Hatfield, Merlin Koester, and Ron Phillips. Members of the United States Navy Funeral Honors Burial Detail participating were OSC Rulo and PSI Howell. Presentation of the folded flag to Floy was by OSC Rulo. For those who preferred, memorial contributions were made to either or both; “Aldersgate United Methodist Church Memorial Fund” and/or “The Veteran’s Community Living Center” and mailed in care of Wilson-McReynolds Funeral Home. Following the service the family and friends had a meal at the church. For additional information call the funeral home at 618-993-2131.

Mason Monroe Wheeler, age 93, of Marion, IL passed away peacefully surrounded by his family, at 11:40 a.m. on Thursday, September 13, 2018, in the Community Living Center of the VA Medical Center of Marion. He was born on Wednesday, April 15,... View Obituary & Service Information

The family of Mason Monroe Wheeler created this Life Tributes page to make it easy to share your memories.

Send flowers to the Wheeler family.