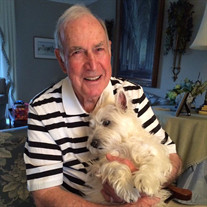 Melbern L. Raglin, age 86, of Lake Bluff, IL and formerly of Hinsdale, IL and Marion, IL lost his battle with Alzheimer’s Disease on November 11, 2018, Veterans Day, at The Memory Care Unit of The Sheridan at Green Oaks in Lake Bluff, Illinois. Mel was born on May 3, 1932 in Pocahontas, Arkansas to parents, James “Bud” and Irene (Groves) Raglin. Mel and his family moved to Marion, Illinois in 1946 where he attended Marion Township High School. He enlisted in the US Army on May 6, 1949 to serve 1st Cavalry Division Infantry in the Korean War. Mel was a Purple Heart recipient, wounded in action on September 20, 1950 and returned to combat after a six week hospital stay in Japan. Corporal Raglin returned home to his family in Marion on August 28, 1952. Mel’s greatest joy was his family. A loving husband, brother, father, grandpa and uncle. He married his wife Colleen on October 18, 1956, and they raised two children and celebrated sixty years of marriage. Mel worked as a pipeline engineer and foreman, joining the Midwest Operating Engineers Union in 1960 and remained a member for 58 years. He retired from Waterman Engineering in 1995. Post retirement, Mel spent 20 years (1995-2015) working part time at Cog Hill Golf Course, where he developed many friendships and a great short game. Mel won the prestigious Cog Hill all employee tournament in 2002. In addition to being an avid golfer, Mel became a Medinah Shriner in 1973 and remained an active member and supporter of the Shriners Hospitals for Children until his passing. He was also a lifelong St. Louis Cardinals fan, and a beloved resident at The Sheridan Memory Care community, where he was known for his quick smile and strong handshake. Mr. Raglin is survived by his wife, Colleen, his children, Steve of Chicago, Illinois and Melanie (Steve) Thornberry of Lake Forest, Illinois, and two grandchildren Ryan and Margo Thornberry. Mel is also survived by his loving sisters Kay Jackson (Donald), and Thresa Johns (Wes), and twenty nieces and nephews. He is preceded in death by his parents, and two sisters, Pat White (Willie) and Shirley Jones (Bill). The family would like to thank the amazing team that provided loving and compassionate care for Mel during his fifteen month residence at The Sheridan at Green Oaks Memory Care. We were blessed to have you in his life. Arrangements were entrusted to Wilson-McReynolds Funeral Home, 900 North Court Street, Marion, IL. The time of visitation was from 5:00 p.m. to 7:00 p.m. on Monday, November 19, 2018, at the funeral home. During the visitation a “Reflection of Life” DVD Memorial Tribute was presented to the family and friends and featured special people, places, and events of Mel’s life. The funeral service was at 11:00 a.m. on Tuesday, November 20, 2018 at the funeral home with Rev. Dr. Bob Dickerson presiding. The prelude musical selection was “Raglin Road” by Bagpiper Paul Thompson. Special recorded vocal musical selections presented during the service were “I Can Only Imagine” by MercyMe, “If We Never Meet Again” by Elvis Presley, “Amazing Grace” by George Jones, and “How Great Thou Art” by Carrie Underwood. The postlude musical selection was “Amazing Grace” by Bagpiper, Paul Thompson. Special comments of memory were presented by son-in-law, Steve Thornberry. Special scriptures read during the service were the 23rd Psalm and John 14: 1-3 by grandchildren, Margo and Ryan Thornberry. Entombment took place in Rose Hill Cemetery located in Marion. Those serving as pallbearers were Steve Raglin, Steve Thornberry, Ryan Thornberry, Ed Jackson, Jeremy Jackson, Wes Johns, Randy Jones, and Duane White. Military honors were accorded at cemetery by members of Heyde-Pillow V.F.W. Post No. 1301 of Marion, and members of the United States National Guard Funeral Honors Burial Detail. V.F.W. members participating were Officer of the Day, Ron Phillips, Commander, Dan Fruge, Chaplin, Ray Hancock, National Colors, Roger Morris, Color Guard, John Andrew, Firing Squad, Art Ambros, Merlin Koester, and Chris Payne, and Bugler, Bill Rice. Members of the National Guard Funeral Honors Burial Detail were Specialist Levan and Private First Class Hunter. Following the graveside committal service at the cemetery, family and friends gathered at Kokopelli Golf Course for a meal and continued time of fellowship and support. For those who preferred, memorial contributions were made to the “Alzheimer’s Association” and mailed in care of Wilson-McReynolds Funeral Home. Memorial envelopes were available at the funeral home. For additional information call the funeral home at 618-993-2131.

The family of Melbern L. Raglin created this Life Tributes page to make it easy to share your memories.

Send flowers to the Raglin family.