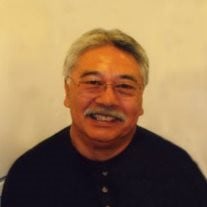 Michael David Ayon, age 69, of Marion, IL, entered into the presence of God at 8:30 p.m. on Friday, February 14, 2014, in the Veteran’s Community Living Center of Marion, IL. He was born on Monday, January 1, 1945, in San Francisco, CA the son of Mathias Santiago and Eulilia (Torres) Ayon. Mike’s father was from the Philippines and his mother was from Mexico making Mike the first generation born in the United States. Mike attended school in San Francisco and was a graduate of Balboa High School. During the Vietnam War, he enlisted into the United States Air Force in 1965 and served as a medic with the Air Force Hospital Squadron. After his period of faithful service he was honorably discharged with the rank of Sergeant in 1968. After his discharge he continued his education at San Francisco University where he received his Bachelors of Arts and Masters of Science degrees. Early in his life after graduation from college, Mike spent time living in Hawaii and backpacking in Europe. He began his working career with the Federal Government with the Job Corps working in Oregon. Later he accepted a position with the Job Corps in Golconda, IL where he served as counselor and administrator. Mike made lasting relationships with many while working at the Job Corps and met his wife Becky there. After a long career he finally retired from the Golconda Job Corps. He was united in marriage to Becky (Dunn) Reeves on Friday, March 25, 1994, in Paducah, KY and together they have shared nearly twenty years of marriage. Mike was a Christian and member of the Southern Illinois Worship Center of Herrin, IL where he enjoyed attending. In his spare time he loved working out in his yard, golfing, tennis, watching football being a devout San Francisco 49ers football fan and has run several marathons. He also enjoyed the times he traveled back to San Francisco spending time with his many family members there. His local family, his extended family and the many friends were very important to him and always enjoyed the times they gathered together. The many memories that have been created will now be cherished by those he leaves behind. He is survived by his wife, Becky Ayon of Marion, IL; daughter and son-in-law, Jenny and Bill Stahlberg of McCall, ID; son and daughter-in-law, Chris and Amy Ayon of Irving, TX; two step-sons and step-daughters-in-law, Gary and Brooke Reeves of Stonefort, IL and Robby and Rindi Reeves of Marion, IL; seven grandchildren, Jerred, Katelyn, Zack, Noah, Josiah, Gracie and Mackenzie; sister and brother-in-law, Terry and Bruno Anton of San Francisco, CA; two brothers and sisters-in-law, Matt and Joyce Ayon and Rich and Lettie Ayon all of San Francisco, CA; three brothers-in-law, Bill Banuelos and Kent Hoelscher both of CA and Vic Hernandez of OR; mother-in-law, Joan Dunn of Carrier Mills, IL; four brothers-in-laws and their families, Robert Field of AZ, Jerry Field of Harrisburg, IL, Monty Dunn of Stonefort, IL and Kent Dunn of Carrier Mills, IL; sister-in-law and her family, Pam Morse of Harrisburg, IL, other extended family members and many friends. He was preceded in death by his parents and three sisters, Laurie Banuelos, Mary Hoelscher and Nita Hernandez. The family would like to extend a very special thank you to the staff and everyone at the Marion Veteran’s Community Living Center for the loving care given to Mike and his family. Arrangements for Michael David Ayon were entrusted to Wilson-McReynolds Funeral Home, 900 N. Court St., Marion, IL. The time of visitation for family and friends was on Tuesday, February 18th, from 5:00 p.m. until 8:00 p.m. at the funeral home. During the time of visitation a “Reflection of Life” DVD Memorial Tribute featuring special people, places and events of Mike’s life was presented to the family and friends. The funeral service was at 11:00 a.m. on Wednesday, February 19, 2014, at Wilson-McReynolds Funeral Home with Pastor Jeff Owens presiding. Comments of memory were presented by Mike’s son, Chris Ayon. The service began with Bagpiper Les Lannom piping a medley of tunes. Other recorded vocal musical selections presented during the service were “I Can Only Imagine” by MercyMe, “It Is Well With My Soul” by The Issacs and “Another Soldier’s Coming Home” by Janet Paschal. Piper Les Lannom piped the postlude medley of tunes as the service was dismissed. Interment followed in Salem Cemetery north of Carrier Mills, IL. Pallbearers were David Floyd, Johnny Baca, Jim Shull, Norb Kulig, Jim Steffen and Danny Camden. Military honors were accorded at the graveside by members of the V.F.W. Heyde-Pillow Post No. 1301, American Legion Post No. 147 and the Illinois National Guard Flag Detail, all of Marion, IL. Those participating were Commander, Dan Fruge; Chaplain, Ernie Rinella; Officer of the Day, Pat Campbell; Bugler, Jim Grieme; Color Guard, Bill Rice and Jessie James; National Colors, Bob Casey; VFW Colors, Jeff Hoffard and Firing Squad, Jerry Swisher, Ron Russell, Fred Read, Bill Hatfield, Bill Hampsey and Don Burgrabe. Members of the Illinois National Guard Flag Detail participating in the folding of the flag were PVT First Class Sean Winemiller and PVT First Class Dena Nesbitt. Presentation of the folded flag to Mike’s daughter, Jenny was by PVT First Class Sean Winemiller. At the graveside Piper Les Lannom piped a medley of tunes as the casket was carried to the grave and after the service. Also at the graveside in-between the military service and the graveside committal service the musical selection “Amazing Grace” was presented by Piper Les Lannom. After the service the family and friends gathered at Becky and Mike’s home for a meal and continued time of fellowship and support. For those who preferred, memorial contributions were made to “The Veteran’s Community Living Center”. Memorial contribution envelopes were available at the funeral home or were mailed in care of Wilson-McReynolds Funeral Home, P.O. Box 370, Marion, IL 62959. For additional information please contact the funeral home by calling 618-993-2131.

The family of Michael David Ayon created this Life Tributes page to make it easy to share your memories.

Send flowers to the Ayon family.