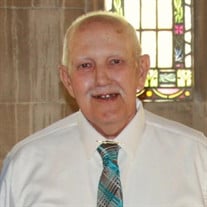 Michael L. Gamble, age 74, of rural Marion, IL, passed away peacefully surrounded by his family, at 10:15 p.m. on Wednesday, September 29, 2020, at his home. He was born on Tuesday, September 3, 1946, in Marion, IL, the son of Roy Cleveland and Julia (Parks) Gamble. Michael attended school in Marion, and was a graduate of Marion High School Class of 1964. Michael answered the call of the nation by serving in the United States Army during the time of the Vietnam War, serving in the 101st Airborne Division and was part of the “Tet Offensive” in 1968, and after his period of faithful service was honorably discharged with the rank of Specialist 4th Class. He was united in marriage to Sandra Kay Pearce on Sunday, April 16, 1967, in the Second Baptist Church of Marion, and together they have shared over 53 years of marriage. His working career began after returning home from the military with the General Telephone Company of Marion. He later began working for C.I.P.S., now known as Ameren, and continued there for the next 30 plus years until his retirement in the late 1990’s. Michael was a member of the Second Baptist Church of Marion, and he also attended at the Community of Faith Church also of Marion, until his health declined. He also was a lifetime member of the Marion V.F. W. Heyde-Pillow Post No. 1301, American Legion Post No. 147 of Marion, Elks Lodge No. 800 of Marion, Fellowship Masonic Lodge No. 89 A.F. & A.M. of Marion, and was a lifetime member of the National Rifle Association. He loved the outdoors and enjoyed bird, duck, deer and turkey hunting. He also enjoyed fishing, camping, reloading and going to the range to shoot. When he wasn’t out in the field pursuing some type of game, he was often seen just sitting out on the porch enjoying everything around him. He also was known for his excellent woodworking ability, always working around the house on some type of project. Though he always kept busy with his work and outside interest, his family was a very important part of his life. He was always interested in all of their many activities and enjoyed the many times they all would be together. The many memories created will now be cherished by those he leaves behind. He is survived by his wife, Sandy K. Gamble of Marion; three sons and two daughters-in-law, David L. and Jodi Gamble, Scott M. and Shari Gamble and Brad W. Gamble all of Marion; five grandchildren, Brandon L. Gamble and wife, Marissa of Royalton, IL, and Briana K. Gamble, Morgan S. Gamble, Jacob D. Gamble and Landon M. Gamble all of Marion; other extended family and many friends. He was preceded in death by his parents; sisters, Margaret and Jean and brother, David. Arrangements were entrusted to Wilson-McReynolds Funeral Home, 900 N. Court St., Marion. The visitation was from 11:00 a.m. until 1:00 p.m. on Friday, October 2, 2020, at the funeral home. During the time of visitation a “Reflection of Life” DVD Memorial Tribute featuring special people, places and events in Michael’s life was presented to the family and friends. Following the time of visitation the funeral service was at 1:00 p.m. with Pastor Kerry Cox presiding. The prelude was recorded vocal musical selections; “Angel” by Sarah McLachlan, “How Great Thou Art” by Carrie Underwood and “Dancing in the Sky” by Dani & Lizzy. Special recorded vocal musical selection presented during the service was “I Can Only Imagine” by MercyMe. The postlude musical selection to conclude the service was “Go Rest High on That Mountain” by Vince Gill. Interment followed in the Maplewood Cemetery of Marion. Pallbearers were David L. Gamble, Scott M. Gamble, Brad W. Gamble, Brandon L. Gamble, Morgan S. Gamble and Jacob D. Gamble. Honorary pallbearer was Michael’s grandson, Landon M. Gamble. At the beginning of the committal service at the cemetery the recorded musical selection “Some Gave All” by Billy Ray Cyrus was presented. Military honors were then accorded at the cemetery by the members of Heyde-Pillow V.F.W. Post No. 1301 of Marion, and members of the United States Army Funeral Honors Burial Detail. During the time of the folding of the flag, the recorded instrumental musical selection “America the Beautiful” was presented. The folded flag was then presented to Michael’s wife, Sandy. Following the committal service at the cemetery the family and friends gathered at the Second Baptist Church of Marion, for a meal and continued time of fellowship and support. For those who preferred, memorial contributions were made to “St. Jude Children’s Research Hospital”. Memorial contributions were mailed in care of Wilson-McReynolds Funeral Home, 900 N. Court Street, Marion, IL 62959. Memorial contribution envelopes were available at the funeral home. For additional information call the funeral home at 618-993-2131.

The family of Michael L. Gamble created this Life Tributes page to make it easy to share your memories.

Send flowers to the Gamble family.