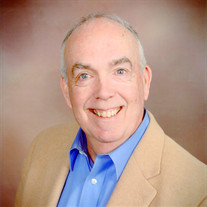 Rev. Dr. Michael Douglas Mayfield, age 66, of rural Pittsburg, Illinois, passed away suddenly at 11:08 PM on Saturday, November 11, 2017, at the OSF Medical Center in Peoria, Illinois, during a visit with his wife Vickie to see their daughter... View Obituary & Service Information

The family of Rev. Dr. Michael Mayfield created this Life Tributes page to make it easy to share your memories.

Send flowers to the Mayfield family.