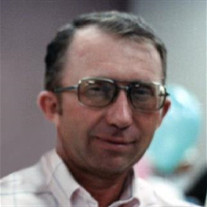 Michael K. “Mike” Crain, age 73, of rural Johnston City, IL passed away peacefully at 9:01 p.m. Thursday, July 21, 2016 in Marion. Mike as he was known was born on Saturday, November 21, 1942, in Johnston City, IL the son of Kenneth D. and Goldia J. (Barker) Crain and she survives. He grew up and attended school in Johnston City and was a graduate of Johnston City High School class of 1960. He faithfully answered the call of your country and served in the United States Army and the Army National Guard from October 1962 until his honorable discharge, in October 1965. Mike was united in marriage to Phyllis J. Ewing on Sunday, December 23, 1962 in the Whiteash Freewill Baptist Church, in Whiteash, IL and together they shared over fifty-three years of marriage. He was a lifelong member of the Whiteash Freewill Baptist Church and a 50 year member of Local Union No. 318. From a young age Mike worked in the family business, K. D. Crain & Sons, Inc. and eventually became a working partner in the family business. There were some important things in his life, his church, his family and his work and he loved them all. He is survived by his mother, Goldia Crain of Johnston City, IL; his wife, Phyllis Crain of Johnston City, IL; his three children, Lance and Tricia of Johnston City, IL, Matt and Sherry Crain of Marion, IL and Rebekah and Jason Petty of Wesley Chapel, FL; one brother, Dan (Karen) Crain of Johnston City, IL; aunt, Gloria Barker of Murphysboro, IL; twelve grandchildren, Natasha (Justin) Payne, Hannah (Alex) Jones, Emmy Crain, Dylan Crain, Maggie Crain, Collin Baust-Crain, Taran Roback, Makennen Crain, Forrest Petty, Seth Petty, Breck Petty and Sage Petty; three great grandchildren, Rexley Jones, Paisley Jones and Rosalie Taylor; other extended family members and many friends. He was preceded in death by his father, Kenneth D. Crain; maternal grandparents, John and Lula Barker and paternal grandparents, Hosea and Della Crain. Arrangements for Michael K. “Mike” Crain have been entrusted to Wilson-McReynolds Funeral Home, 900 N. Court St., Marion, IL. The visitation will be from 4:00 p.m. until 7:00 p.m. on Sunday, July 24th at the funeral home. The funeral service will be at 11:00 a.m. on Monday, July 25, 2016, at Wilson-McReynolds Funeral Home with Rev. Andy Lee presiding. Interment will follow in Lakeview Cemetery of Johnston City, IL. Military rites will be accorded by the Herrin Veteran’s of Foreign Wars and the Army National Guard of Marion, IL For those who prefer, memorial contributions may be made to either “Parkinson Foundation” or “Hospice of Southern Illinois” and mailed in care of Wilson-McReynolds Funeral Home, P.O. Box 370, Marion, IL 62959. Memorial envelopes will be available at the funeral home. For additional information please contact the funeral home by calling 618-993-2131.

The family of Michael K. "Mike" Crain created this Life Tributes page to make it easy to share your memories.