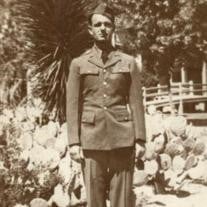 Mike P. Mancuso, age 98, of Marion, IL, passed away at 5:15 a.m., on Friday, April 20, 2012, at Heartland Regional Medical Center of Marion, IL. He was born on Thursday, June 26, 1913, in Marion, IL the son of Vito and Filomena “Mamie” (Guerino) Mancuso. Mr. Mancuso answered the call of this nation by serving in the United States Army during the time of WW II and after his period of faithful service he was honorably discharged with the rank of Private. His working career in his early years was as a factory worker and later in life he worked for the Marion Water Department. He was a member of St. Joseph Catholic Church of Marion, IL. Mr. Mancuso is survived by his niece, Rosalie Vaccaro of St. Louis, MO; nephew, Vito Agnello of St. Louis, MO and several other nieces and nephews; neighbors, good friends and helpers, Joan Mayer and Gene and Gypsy George all of Marion, IL and many friends. He was preceded in death by his parents; two sisters, Jessie Agnello and Stella Conti and brother, Anthony Mancuso. Arrangements for Mike Paul Mancuso were entrusted to the Wilson-McReynolds Funeral Home, 900 N. Court Street, of Marion, IL. A time of visitation was between 9:30 a.m. and 10:30 a.m. on Monday, April 23, 2012, at St. Joseph Catholic Church, located at 600 N. Russell St., Marion, IL. Following the time of visitation the funeral mass was at 10:30 a.m. with Monsignor Thomas D. Flach, Pastor presiding. Special scripture readings of the mass were presented by Clark Deacon. Altar servers assisting in the mass were Ernie Rinella, Jo Mayer and Dan Fruge. The music of the mass was presented by organist and cantor, Valerie Oestry. Interment followed in the Maplewood Cemetery of Marion, IL. Pallbearers were Ernie Rinella, Dan Fruge, Frank Crosson and Bob Wilson. After the service at the cemetery the family and friends gathered at Bennie’s Italian Restaurant of Marion, for a meal and continued time of fellowship and support. For additional information please call the funeral home at 618-993-2131.

The family of Mike P. Mancuso created this Life Tributes page to make it easy to share your memories.

Send flowers to the Mancuso family.