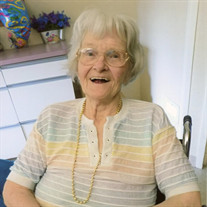 Mildred Lucille Farris, age 94, of Marion, IL, passed away peacefully with her family by her side at 3:20 p.m. on Friday, December 14, 2018, in Parkway Manor of Marion. She was born on Monday, December 8, 1924, in Dyersburg, TN, the daughter of Bernard Herbert and Ida Leathie (Herod) Dean. Mildred was united in marriage to James Merle Farris on Wednesday, August 29, 1945, in Metropolis, IL and together they shared over thirty-four years of marriage until his death on Friday, January 25, 1980. She was of the Baptist faith. Mildred always kept busy and was always interested in the activities of her family, especially those of her children and grandchildren. She enjoyed the many times they shared together and the memories that were created will now be cherished by those she leaves behind. She is survived by two sons and daughters-in-law, James E. and Nancy Farris and Eugene and Cheryl Farris all of Marion; five grandchildren Scott Farris, Jeffrey Farris, Crystal Neal and her husband James, Bryce Farris and his wife Cristyn and Angie Hobbs and her husband John; eleven great grandchildren and one great great-grandson; sister-in-law, Lawanda Farris and niece, Linda Sue Sielbeck both of Grand Chain, IL; close friends, Jerry and Kris Cheers and Dixie and Larry Garris all of Marion, other extended family and many friends. She was preceded in death by her parents, husband; son, Charles Loren Farris who passed away on July 6, 1973; two sisters, Minnie Belle Kerr and Mary Ernestine and brother-in-law, Lannis Farris. Arrangements for Mildred L. Farris were entrusted to Wilson-McReynolds Funeral Home, 900 N. Court St., Marion. The visitation was from 10:00 a.m. until 11:00 a.m. on Tuesday, December 18, 2018, at the funeral home. During the time of visitation a “Reflection of Life” DVD Memorial Tribute was presented to the family and friends. Following the time of visitation the funeral service followed at 11:00 a.m. with Brother Bob Nolen presiding. The prelude and postlude musical selections were recorded instrumental piano selections. Special recorded vocal musical selections presented during the service were “In the Sweet Bye and Bye” by Ann Williamson, “Old Rugged Cross” by Alan Jackson and “I’ll Fly Away” by Joey and Rory. Interment followed next to her husband in Rose Hill Cemetery of Marion, IL. Pallbearers were John Hobbs, Scott Farris, Gerry Cheers, Bryce Farris, Jeffrey Farris and James Neal. Following the committal service at the cemetery the family and friends gathered at Bennie’s Italian Restaurant in Marion for a meal and continued time of fellowship and support. For additional information call the funeral home at 618-993-2131.

Mildred Lucille Farris, age 94, of Marion, IL, passed away peacefully with her family by her side at 3:20 p.m. on Friday, December 14, 2018, in Parkway Manor of Marion. She was born on Monday, December 8, 1924, in Dyersburg, TN, the daughter... View Obituary & Service Information

The family of Mildred Lucille Farris created this Life Tributes page to make it easy to share your memories.

Send flowers to the Farris family.