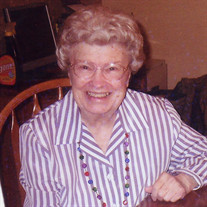 Mildred V. Harvel, age 99, of Marion, IL, passed away peacefully in the Marion Rehabilitation and Nursing Center of Marion, at 4:50 p.m. on Tuesday, January 26, 2016. She was born on Sunday, January 14, 1917, in Cambria, IL, the daughter of George Newton and Etta Ethel (Waldron) Brayfield. Mildred grew up in Cambria and attended the Cambria schools. She was united in marriage to Carl Monroe Harvel on Saturday, March 20, 1937, in Cambria, IL and together they shared over 48 years of marriage until his death on Saturday, September 7, 1985. Mildred never worked outside of her home. She enjoyed managing her home and seeing to the needs of her husband, son and family. She was a charter member in 1947, of the Bible Fellowship Baptist Church of Carterville, IL. Her church was a very important part of her life and was always actively involved and taught Sunday school until her health declined. Mildred’s sister, Ruth passed away at a young age and she became very involved in the lives of her children, Joan and Marsha. All through the years Mildred was known as “Aunt Minnie” to Joan and Marsha and all of their families. Mildred was a fabulous cook and everyone looked forward going to her home for gatherings and enjoying her chicken & noodles, blackberry cobbler and strawberry pie. The many memories that have been created will now be cherished by those she leaves behind. She is survived by her son, John D. Harvel of Marion; granddaughter, Donna Palmer and her husband James of Austin, TX; four nieces, Joan Tregoning of Carterville, Marsha Norman of Locust Grove, VA, Joyce Harris of Phoenix, AZ and Lillian Helwig of Plano, TX; nephew, Bill Brayfield of Johnston City, IL; two great nephews, Rob Norman and Doug Norman; two great nieces, Beverly Benfield and Susan Guerra, other extended family and many friends. She was preceded in death by her parents, husband; sister, Ruth Harvel; two brothers, Wayne and Wathan Brayfield and her great nephew, Joel Tregoning. Arrangements for Mildred V. Harvel have been entrusted to Wilson-McReynolds Funeral Home, 900 N. Court St., Marion, IL. The graveside committal service will be at 11:00 a.m. on Saturday, January 30, 2016, in Egyptian Memorial Gardens Cemetery of Energy, IL with Rev. Danny Ward presiding. Those wishing to attend the committal service should gather at the cemetery prior to 11:00 a.m. Interment will follow next to her husband. For those who prefer, memorial contributions may be made to the “Alzheimer’s Association” and mailed in care of Wilson-McReynolds Funeral Home, P.O. Box 370, Marion, IL 62959. Memorial envelopes will be available at the cemetery and funeral home. For additional information please contact the funeral home by calling 618-993-2131.

The family of Mildred V. Harvel created this Life Tributes page to make it easy to share your memories.

Send flowers to the Harvel family.