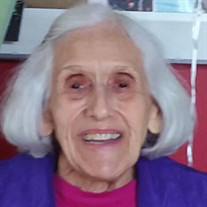 Mildred L. Herrmann, age 92, of Marion, IL, formerly of the Harrisburg and Shawneetown, IL area, passed away peacefully with her family near at 7:15 a.m. on Friday, December 10, 2021, in Parkway Manor of Marion, IL. She was born on February 22, 1929, in Harrisburg, IL, the daughter of Louis and Katherine (Gresiak) Bobka. Mildred attended school in Harrisburg and was a graduate of Harrisburg High School. She was united in marriage to George Nicholas Herrmann on June 9, 1951, in St. Mary’s Catholic Church of Harrisburg, and together they shared over 47 years of marriage until his death on September 4, 1998. She was co-owner and operator with her husband, of Herrmann’s Drug Store of Shawneetown from 1956 until the mid-1990’s. After their retirement they moved to Marion, in 1997, to be near their family. While living in Marion, she attended at St. Joseph Catholic Church and also volunteered at the Marion Veteran’s Hospital. In her spare time, she enjoyed sewing, doing crafts, gardening, reading and “Bargain Shopping.” She also loved spending time with her family and was always interested in knowing about all the many activities in their lives, especially of her grandchildren. The memories created will now be cherished by those she leaves behind. She is survived by three sons, John Herrmann and wife, Cathy of Kirkwood, MO, Thomas Herrmann of Marion and Steve Herrmann and wife, Rhonda of Marion; five grandchildren, Ellen Lynch and husband, Patrick of Webster Groves, MO, Nicholas Herrmann and wife, Carmen of Warner Robins, GA, Allison Herrmann of St. Louis, MO, Celeste Herrmann of Rogers, AR and Drew Herrmann of Marion; great granddaughter, Charlotte Lynch of Webster Groves, MO, other extended family and many friends. She was preceded in death by her parents, husband; brother, Louis Bobka and sister, Ann Haegele. Arrangements were entrusted to Wilson-McReynolds Funeral Home, 900 North Court Street, Marion, IL. The visitation was on Wednesday, December 15, 2021, from 11:00 a.m. to 1:30 p.m. at the funeral home. During the time of visitation, a “Reflection of Life” DVD Memorial Tribute featuring special people, places and events in Mildred’s life was presented to the family and friends. Following the time of visitation, the funeral service was at 1:30 p.m. with Rev. Father Brian Barker presiding. Special recorded vocal musical selections presented during the service were; “Ave Maria” by Michelle Todd and “Unforgettable” by Nat “King” Cole. Also, during the service Rev. Father Brian presented the vocal musical selection “All the Roads” and accompanied himself on the piano. Interment followed next to her husband, in Sunset Lawn Cemetery of Harrisburg, IL. Pallbearers were Ryan Caswell, Nick Herrmann, Jeff Butler, Drew Herrmann, Derek Bobka and Jim Haegele. Following the committal service at the cemetery the family and friends gathered at 17th Street Bar-B-Q Restaurant in Marion, for a meal and continued time of fellowship and support. The family requested for those who prefer, memorial contributions be given to “Alzheimer’s Association.” For additional information call the funeral home at 618-993-2131.

Mildred L. Herrmann, age 92, of Marion, IL, formerly of the Harrisburg and Shawneetown, IL area, passed away peacefully with her family near at 7:15 a.m. on Friday, December 10, 2021, in Parkway Manor of Marion, IL. She was born on February... View Obituary & Service Information

The family of Mildred Lucille Herrmann created this Life Tributes page to make it easy to share your memories.

Send flowers to the Herrmann family.