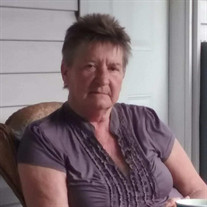 Mona A. Marks, age 67, of Creal Springs, IL passed away peacefully at 11:23 p.m. on Thursday, November 23, 2017 at her home in Creal Springs, surrounded by her family. She was born on Saturday, April 22, 1950 in Creal Springs, IL the daughter of Jesse and Mildred (Howard) Marks. Mona was united in marriage to Raymond R. Marks on Tuesday, August 31, 1965 in Creal Springs. Together they shared over thirty-three years of marriage until his death on Friday, January 15, 1999. Mona dedicated most of her life working as a CNA. She was a member of the First Baptist Church and the VFW Ladies Auxiliary. Mona loved her flowers, fish pond, crafts, sitting on the porch drinking coffee and loved her pets and companions, Quag and Baby Girl. Mona was a loving mother, grandma and friend to many. Mona is survived by two sons and one daughter-in-law, Matthew and Sassy Marks and Raymond Marks all of Creal Springs; two daughters and one son-in-law, Janet Marks of Creal and Angie and Ed Wiley of Johnston City; eleven grandchildren, Derek (Courtney), Kiana, Cody (Haley), Hayden (Nikki), Alex, Tamara (Jeff), David, Darin, Andrew, Stephanie (Gino) and Annie (Chris); sixteen great grandchildren; three brothers, Jeff (Dawn), Bob (Brenda) and Larry (Aeran); other extended family members and friends. She was preceded in death by her parents, husband, and two sisters. Arrangements for Mona Marks have been entrusted to Wilson-McReynolds Funeral Home, 900 North Court Street, Marion, IL. Visitation will be from 5:00 p.m. until 8:00 p.m. on Monday, November 27, 2017. The funeral will be Tuesday, November 28, 2017 at 2:00 p.m. at the funeral home with Diana Dunmire presiding. Interment will take place in White Oak Cemetery southeast of Marion. For additional information call the funeral home at 618-993-2131.

The family of Mona Allene Marks created this Life Tributes page to make it easy to share your memories.

Send flowers to the Marks family.