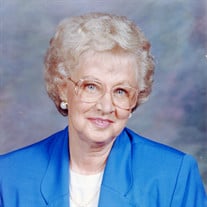 Myrl Winifred (McKinney) Turner Baskett, age 87, of Marion, IL, passed away peacefully at 4:30 a.m. on Friday, July 20, 2018, in the Carrier Mills Rehabilitation Center of Carrier Mills, IL. She was born on Friday, August 8, 1930, in the Scottsboro area of Marion, the daughter of William Ralph and Maggie (Davis) McKinney. Myrl was first united in marriage to Billy James Turner on Friday, March 5, 1948, and together they shared nearly 25 years of marriage until his death on Saturday, January 27, 1973. She later was united in marriage to Francis Richard Baskett on Saturday, November 19, 1977 in Marion, and together they shared over 3 years of marriage until his death on Tuesday, January 27, 1981. Her working career was for many years in retail, working for several businesses of the area including Ben Franklin, Medicare Glazier and Revco Drug until her retirement at the age of 63. She was a member of Second Baptist Church of Marion. In her spare time she enjoyed reading her Bible, working word search puzzles and spending time with her family. The many memories that have been created will now be cherished by those she leaves behind. She is survived by her daughter and son-in-law, Renee and Chris Kirby of rural Goreville, IL; son, Kenneth James Turner of Marion; granddaughter, Kimberly Renee Caldwell and her husband Jason of Sebree, KY; great grandson, Timothy Dale Caldwell of Sebree, KY; brother and sister-in-law, Ronnie and Deanna McKinney of Marion; sister-in-law, Dody McKinney of Marion; special aunt, Alma McKinney of Marion, a host of nieces and nephews, other extended family and many friends. She was preceded in death by her parents, both husbands; brother, Bill McKinney and sister, Reola Mae McKinney who passed away when she was nearly 1 year old. Arrangements for Myrl Winifred (McKinney) Turner Baskett were entrusted to Wilson-McReynolds Funeral Home, 900 N. Court St., Marion. The visitation was on Tuesday, July 24, 2018, from 11:00 a.m. until 1:00 p.m. at the funeral home. During the visitation a “Reflection of Life” DVD Memorial Tribute was presented to the family and friends and featured special people, places, and events of Myrl’s life. Following the time of visitation the funeral service was at 1:00 p.m. with Rev. Mark Mohler and Rev. George Arbeiter presiding. The prelude and postlude musical selections were by pianist, Lori Creamer. Special vocal musical selections presented during the service were “I’ll Fly Away” and “What a Day That Will Be” both by pianist Lori Creamer, “Don’t Cry For Me” an orginal song by Rev. George Arbeiter with a recorded accompaniment, and “Go Rest High on That Mountain” by Vince Gill. Interment followed next to her husband Richard Baskett, in Rose Hill Cemetery of Marion. Those serving as pallbearers were Pat Cump, Greg Watson, Timothy Caldwell, Jason Caldwell, George Arbeiter, and Tracy Kirby. Special vocal musical selection presented at the graveside committal service was “Will the Circle Be Unbroken” by A.J. Arbeither and Rev. George Arbeiter who accompanied himself on the guitar. Following the graveside committal service at the cemetery, family and friends gathered at the Second Baptist Church of Marion for a meal and continued time of fellowship and support. For those who preferred memorial contributions were made to either or both; “Alzheimer’s Association” and/or “Hospice of Southern Illinois” and mailed in care of Wilson-McReynolds Funeral Home, 900 N. Court Street, Marion, IL 62959. Memorial envelopes were available at the funeral home. For additional information call the funeral home at 618-993-2131.

Myrl Winifred (McKinney) Turner Baskett, age 87, of Marion, IL, passed away peacefully at 4:30 a.m. on Friday, July 20, 2018, in the Carrier Mills Rehabilitation Center of Carrier Mills, IL. She was born on Friday, August 8, 1930, in the Scottsboro... View Obituary & Service Information

The family of Myrl Winifred (McKinney) Turner Baskett created this Life Tributes page to make it easy to share your memories.