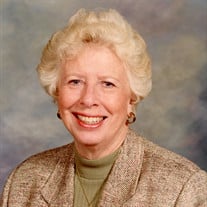 Myrla Jane (Leach) Sanders, 91, passed peacefully on January 6, 2018 at 4:15 p.m. Myrla was born in Ackerman, MS on September 30, 1926 to William Augustus and Myrla (Hoobler) Leach. Her family moved to Marion, IL in 1934 where Myrla remained until her death. On May 4, 1947, Myrla married the love of her life, James Willis Sanders. Myrla was very active in her years at Marion High School where she served on the Student Council (along with Jim), editor of the yearbook, president of several clubs, the lead in the Junior and Senior plays and won shorthand and typing awards as well as Rotary awards all four years. Myrla attended Southern Illinois University and then transferred to University of Illinois where she received her bachelor’s degree in Education. She and Jim remained proud Illini fans throughout their lives attending many of their sporting events. Singing was a great joy to Myrla and she was in the Children’s’ Choir in Fairfield, IL, the Junior Choir of Marion, and elementary, high school and college choirs. She was a member of the First United Methodist Church Chancel Choir for 70 years. Myrla was very active in her community and church. She was a member of P.E.O. Chapter MN, Beta Sigma Phi Sorority and The First United Methodist Church and Methodist Women. As a fundraiser for charities with United Methodist Women, she helped cook Rotary lunches for many years. She was a youth sponsor at the church and enjoyed many social activities with her church group of friends, “The Rat Pack.” She was a long-time deliverer of Meals on Wheels in Marion. In Myrla and Jim’s 43 years of marriage, she was his strongest supporter in all his community and statewide service. They enjoyed travels to many countries along with entertaining, raising their five children and caring for their elderly mothers. In her later years, Myrla spent time traveling, having dinners and playing pinochle with her group of special lady friends. She was a great champion of her children and grandchildren and often provided babysitting care and attended their important occasions whenever possible. She will be greatly missed by her large family: sister Wilma Smith of Idaho, children: Jane Vest (Jan) of Gulf Shores, AL, Gail Murphy of Marion, IL, Larry Sanders (Jo) of Marion, IL, Ann Bradley (Pat) of Lindenhurst, IL, John W. Sanders (Amy) of Marion, IL;. 12 grandchildren: Eric Murphy (Jessie) of Bonner’s Ferry, ID, Becca Perhacs (Scott) of O’Fallon, MO, Brian Murphy (Amy) of Beacon, NY, Elizabeth Branch (Jason) of Slidell, LA, Megan Murphy (Armando) of Durango, CO, Sarah Sanders (Rafael) of Marion, IL, James Sanders (Andrea) of Boulder, CO, Meghan Bradley (Billy) of Palatine IL, David Sanders (Elisha) of Carbondale, IL, Scott Vest of Durango, CO, Nicholas Sanders of Carbondale, IL, Erin Bradley of Lisle, IL; 7 great-grandchildren (and 3 on the way): Tyler Branch, Kylin Murphy-Garcia, Troy Perhacs, Abbey Perhacs, Alice Branch, Quentin Murphy-Garcia, and June Murphy. The family is grateful for the services of many loving caregivers over the last several years. Myrla was preceded in death by her husband James W. Sanders, her parents, brother Bernard Leach, and sister Arline (Leach) Gerber. A celebration in honor of her wonderful life was held at The First United Methodist Church, located at 208 West Main St. in Marion with visitation on Sunday, January 14, 2018 from 1-4 p.m. During the visitation a “Reflection of Life” DVD Memorial Tribute was presented to the family and friends and featured special people, places, and events of Myrla’s life. The funeral service was at 4:00 p.m. with Rev. John Hackman and Rev Dr. Victor Long officiating. The prelude musical selection was a piano selection presented by Myrla’s grandson, Nicholas Sanders. Special congregational hymns presented during the service were “Surely the Presence of the Lord is in This Place” and “Blessed Assurance,” accompanied by Marian Smith on the organ and Yolonde Peterson on the piano. Special vocal musical selection presented “His Eye is on the Sparrow” by granddaughter, Becca Perhacs, accompanied on the piano by Marian Smith, with Jo Sanders signing the song. The postlude musical selection was presented by organist, Marian Smith. Grandchildren David Sanders, Brian Murphy, Erin Bradley, and Sarah Sanders presented special scriptures during the service with comments of memory presented by Myrla’s son, John Sanders. Following the service the family and friends had a meal at First United Methodist Church for continued time of fellowship and support. Interment was at 9:00 a.m. on Monday, January 15th in Rose Hill Cemetery of Marion. Those serving as pallbearers were Nicholas Sanders, Eric Murphy, James Sanders, Brian Murphy, David Sanders, Scott Perhacs, Jan Vest, Pat Bradley. Memorial contributions were made to “First United Methodist Church” and the “James W. and Myrla J. Sanders Rotary Scholarship Fund” and mailed in care of Wilson-McReynolds Funeral Home, 900 N. Court Street, Marion, IL 62959. Memorial envelopes will be available at the church and funeral home. Wilson-McReynolds Funeral Home, 900 N. Court St., Marion were entrusted with arrangements. For additional information please call the funeral home at 618-993-2131.

The family of Myrla J. Sanders created this Life Tributes page to make it easy to share your memories.