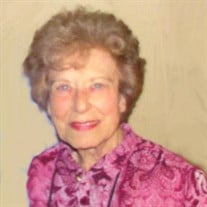 Nicolene P. “Niki” Hartwell, age 89, of Marion, IL, formerly a resident of Alton, IL for 53 years, passed away peacefully with her family by her side at 6:50 p.m. on Tuesday, November 26, 2019, in her home. She was born on Thursday, July 17, 1930, in Greenville, IL, the daughter of Vlado S. and Elsie Lee (Gross) Velloff. Niki attended school in Alton and was a graduate of Alton High School. She continued with her education by attending at Shurtleff College, a Baptist liberal art school of Alton. She was united in marriage to Charles Lloyd Hartwell, on Friday, July 18, 1952, in Calvary Baptist Church of Alton and together they have shared over 67 years of marriage. Her working career was as a secretary and business manager. She worked for the Miller’s Mutual Insurance Agency of Alton for several years and later for Apple Insurance Agency also of Alton for the majority of her working career until her retirement in the late 1990’s. After her retirement she and her husband moved to the Marion area in 2001, where they have made their home. Niki was a former member of Calvary Baptist Church of Alton where she served as a Sunday school teacher to those with special needs. After moving to the Marion area she became a member of Cana Baptist Church of Creal Springs, IL. Niki inherited Bulgarian heritage from her father and enjoyed collecting Bulgarian recipes. She also was a collector of many other types of cooking books and enjoyed writing down and getting copies of recipes from many of the older family members and friends. She loved her family and enjoyed the many times they all shared together and was always interested in all of their many activities. Those she now leaves behind will cherish the many memories that have been created. She is survived by her husband, Charles L. Hartwell of Marion; daughter, Paula Hartwell of Godfrey, IL; son, Tim Hartwell of Marion; five grandchildren, Lauren Ferguson of Belleville, IL, Jacob Ferguson of Beaufort, SC, Katelyn Ferguson of Godfrey, IL, Ethan Ferguson of China Lake, CA and Macy Kirtlink of Godfrey, IL; three great grandchildren, Raphael Lopez and Leonardo Lopez both of Belleville, IL and Jacob Ferguson, Jr. of Mississippi; brother and sister-in-law, Steven and Kathy Velloff of St. Louis, MO; two sisters-in-law, Jeanette Blumenstock and her husband, Eugene of Creal Springs, IL and Kittianne Velloff of Bartlett, TN, other extended family and many friends. She was preceded in death by her parents and brother, Gene Velloff. Arrangements have been entrusted to Wilson-McReynolds Funeral Home, 900 N. Court St., Marion. The visitation will be from 11:00 a.m. until 1:00 p.m. on Saturday, November 30, 2019, at the funeral home. Following the time of visitation the funeral service will be at 1:00 p.m. with Pastor John Howat presiding. Interment will follow in Rose Hill Cemetery of Marion. For those who prefer, memorial contributions may be made to “Cana Baptist Church” and mailed in care of Wilson-McReynolds Funeral Home, 900 N. Court Street, Marion, IL 62959. Memorial envelopes will be available at the funeral home. For additional information call the funeral home at 618-993-2131.

The family of Nicolene Paula "Niki" Hartwell created this Life Tributes page to make it easy to share your memories.