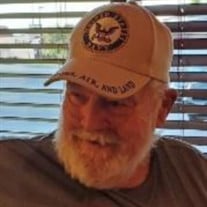 Norvel L. Wood, age 84, of Herrin, IL, passed away peacefully with his daughters by his side, at 9:39 a.m. on Saturday, January 16, 2021, in Herrin Hospital of Herrin, IL. He had been a resident of upper New York State from 1980 until 2015, when his health started to decline and he moved to be near his family. He was born on Sunday, July 19, 1936, in Marion, IL, the son of Charles William and JoAnna (Norman) Lane. His father was accidentally killed in an accident in 1947, and his mother later remarried. Norvel attended school in Carmi, IL, and was a graduate of Carmi High School Class of 1955. He then continued his education attending at Southern Illinois University at Carbondale, IL. While there he played football and was in their gymnastic program. He was united in marriage to Marjorie Gibbs on Sunday, March 18, 1956, in Carmi, IL. This union was blessed with two daughters, Tammy and Tracy. Shortly after his marriage in 1956, he went to talk with a Marine Recruiter about joining the military and a Senior Navy Chief talked with him and while there and he decided to enlist in the United States Navy. He then started his long military career, serving for the next 26 years in the Navy and served overseas in Vietnam. While serving in the Navy he helped organize the Women’s Rifle Drill Team in Memphis, TN. He also taught the A and B Navy Job Training Schools, was a part of Helicopter Sea Combat Squadrons Four (HSC-4: Black Knights) and Helicopter Anti-Submarine Squadron Light 31, (HSL-31: Arch Angels), helping develop the “Billy Pugh Net” that retrieved the astronauts from the space capsule after splashdown and was a part of the Apollo 8 and 11 space missions. He also was a part of developing what we now know as Velcro. Also during his time in the military he continued his education by always taking various educational courses. After his period of faithful service he was honorably discharged in 1982, with the rank of Master Chief Petty Officer. His working career early in his life was as a Wildcatter in the oil fields in White County near Carmi, and he also learned to be a butcher. After his long military career he worked with IBM, ORI, DOD and the Sikorsky Corporation in upper New York State on many different projects until his retirement in 2002. He was of the Protestant faith and knew the Bible forwards and backwards. Norvel had a very active mind and loved problem solving. He also was an avid reader, chess player, artist working in pastels, enjoyed building computers and was an armature wine maker just to name a few things he enjoyed. He had seen the world and enjoyed being in the outdoors, was an avid hunter of waterfowl, deer, quail and just about everything. While living in San Diego, CA, on the weekends he loved going out on the tuna boats and deep sea fishing. He also enjoyed watching and analyzing college football not really having a favorite team. He loved his family, especially his grandchildren and great grandchildren, and was always interested in all of their many different activities. The many memories that have been created will now be cherished by those he leaves behind. He is survived by two daughters, Tammy Wood of Marion, IL, and Tracy Newman of Herrin, IL; four grandchildren, Michael Newman and his wife, Sarah of West Frankfort, IL, Matthew Newman of Carbondale, IL, Michelle Griffith and her husband, Mike of Marion, IL, and Mary Barnhart and her husband, Ian of Carbondale, IL; five great grandchildren, Norah Ember Newman and Kingston Eugene Ledger Newman both of West Frankfort, IL, Lily Grace Newman and Bastian Zao Barnhart both of Carbondale, IL and Rowan Daniel Griffith of Marion, IL; his 20 year old Black Labrador, Milady who drank an cup of coffee with Norvel every day, and a host of extended family and friends. He was preceded in death by his parents; brother, Norman Wood and sister, Becky Johnston. Arrangements were entrusted to Wilson-McReynolds Funeral Home, 900 North Court Street, Marion. The visitation was on Friday, January 22, 2021, from 11:00 a.m. to 12:00 p.m. at the funeral home. Following the time of visitation the funeral service was at 12:00 p.m. with Norvel’s daughter, Tracy Newman presiding. Reading of special scriptures during the service was by Norvel’s grandson, Matthew Newman. Other family members presenting comments of memory were daughter, Tammy Wood and former wife, Marjorie Wood. Special recorded vocal musical selections presented during the service were “Goodness of God” by SI Worship Center Virtual Choir, “Remember Me” by Jake Coco and Savannah Outen, “Eternal Father” by The US Navy Band & Sea Chanters Chorus and “Remember Me” by contestant on Sing! China 2018. Interment followed next to his father, Charles W. Lane in Maplewood Cemetery of Marion, IL. Pallbearers were Michael Newman, Matthew Newman, Mike Griffith and Ian Barnhart. Military honors were accorded at the graveside by the members of the Heyde-Pillow V.F.W. Post No. 1301 of Marion, and members of the United States Navy Funeral Honors Burial Detail at the cemetery. For those who preferred, memorial contributions were made to “St. Jude’s Children’s Research Hospital”. Memorial contributions were mailed in care of Wilson-McReynolds Funeral Home, 900 N. Court Street, Marion, IL 62959. Memorial envelopes were available at the funeral home. For additional information call the funeral home at 618-993-2131.

The family of Norvel Lane Wood created this Life Tributes page to make it easy to share your memories.

Send flowers to the Wood family.