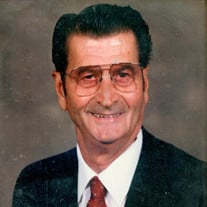 Orvel Dean Layne, age 91, of West Frankfort, IL, passed away peacefully at 5:07 A.M. on Monday, March 19, 2018, in Herrin Hospital, of Herrin, IL. He was born on Sunday, July 30, 1926, in Pittsburg, IL, the son of Joe Kenneth and Lela Olive (Williams) Layne. Orvel was united in marriage to Emma P. Harris on Wednesday, July 30, 1946 in Benton, IL, and together they have shared over 71 years of marriage. Orvel was a coal miner, having worked for the Old Ben No. 26 Coal Mine near Sesser, IL for 30 years. At the time of his retirement in 1990, he was working as a caterpillar operator on top at the mine. He was a member of the All Nations Church of God of Marion, IL and also was a member of the United Mine Workers of America Local Union No. 1487 of Benton, IL. Orvel loved the outdoors and enjoyed golfing, fishing and hunting. He loved his family and was always interested in all of their many activities, especially those of his grandchildren and great grandchildren. He enjoyed the many times they all would be together and cherished the memories. The many memories that were created will now be cherished by those he leaves behind. He is survived by his wife, Emma Layne of West Frankfort; two daughters and one son-in-law, Sheila and Rannie Dean Boilet of Johnston City, IL and Dixie Beavers of the Lake of Egypt, IL; two sons and one daughter-in-law, Terry Eugene Layne of West Frankfort and Steve and Rhonda Layne of Johnston City; five grandchildren, Jason Beavers and his wife, Stephanie, of West Frankfort, Stevie Jo Bartley and her husband, James L., of the Lake of Egypt, Crimson Bearden and her husband, Allen, of Marion, IL, Zackery Layne of and his wife, Vivian, of Johnston City, and Tyler Layne of Johnston City; five great grandchildren, Alexa Beavers of West Frankfort, Aaron Beavers of West Frankfort, Noah Bearden of Marion, Rheanon Bartley of the Lake of Egypt, and Christian Layne of Johnston City; brother, Kenneth Layne of Marion, IL, other extended family, and many friends. He was preceded in death by his parents; grandson, Terry Joe Layne; two sisters, Lola Fae Thompson and Dorothy Jean Layne; and brother, Vernell Layne. Arrangements have been entrusted to Wilson-McReynolds Funeral Home, 900 N. Court St., Marion. The graveside committal memorial service will be in Lakeview Cemetery of Johnston City, IL at 1:00 p.m. on Thursday, March 22, 2018, with Pastor Don Colson and Pastor Bruce Fox presiding. Those wishing to attend the committal service should gather at the cemetery prior to 1:00. For those who prefer, memorial contributions may be made to “All Nations Church of God Building Fund” and mailed in care of Wilson-McReynolds Funeral Home, 900 N. Court St. Marion, IL 62959. Memorial envelopes will be available at the funeral home and at the cemetery. For additional information call the funeral home at 618-993-2131.

The family of Orvel Dean Layne created this Life Tributes page to make it easy to share your memories.

Send flowers to the Layne family.