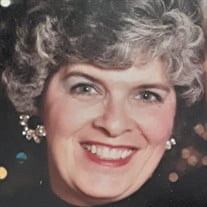 Pamela Kay Hendricks, age 81, of Herrin, IL, passed away peacefully at 9:45 a.m. on Monday, July 19, 2021, in Manor Court of Carbondale, IL comforted by her loving husband, Roger Hendricks. After a long journey with Alzheimer&#8217;s her family... View Obituary & Service Information

The family of Pamela Kay Hendricks created this Life Tributes page to make it easy to share your memories.

Send flowers to the Hendricks family.