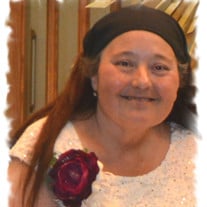 Patricia Ann “Patti”(Stubblefield) Tooley, age 51, of West Frankfort, IL, formerly of Marion and Johnston City, passed away at 1:50 a.m. on Sunday, February 8, 2015, in Good Samaritan Regional Health Center of Mt. Vernon, IL. She was born on Wednesday, December 18, 1963, in Marion, IL the daughter of, Vernell “Vern” and Rosalie (Segretario) Stubblefield. Early in her school years she attended school in Marion. Her family then moved to Johnston City, IL and she attended school in Johnston City and was a graduate of Johnston City High School in 1982. She continued on with her education attending John A. Logan College in Carterville, IL. Patti was united in marriage to James William “Bill” Tooley on Friday, February 3, 1989, in Marion, IL and together they have shared over twenty-six years of marriage. The majority of Patti’s working career has been in factory type work. During her working career she worked for Patton Roof Bolt Company of Marion, Schellar Globe of Herrin, and later with Olin/General Dynamics of Marion. She is a member of St. John the Baptist Catholic Church of West Frankfort, IL. Some of her other memberships and activities include a term of service on the St. John’s Catholic School Board, former member of the Knights of Columbus Ladies Auxiliary in West Frankfort, IL and was former member of the Illinois Professional Pet Breeders Association. In her spare time she bred and sold registered champion poodles all over the United States and some internationally including Germany and Afghanistan. She was known for her knowledge of the desirable qualities of the large poodle breed. Three of the most memorable poodles she remembered were named “Ceasar”, “Tenille” and “Duchess” that they kept and raised. Also in her spare time she loved to cook for her family and their many gatherings. She is survived by her husband, Bill Tooley of West Frankfort, IL; son, Vern Tooley of St. Charles, MO; daughter and son-in-law, Rebecca Marie and Bill Schmidt, III of Carterville, IL; sister, Verna McNeil of Royalton, IL; niece, Amy McNeil and her companion, Brad Daron both of Carterville, IL; nephew, Chris McRoy of rural West Frankfort, IL; brother-in-law, John Tooley and wife, Belinda of Newburgh, IN, sister-in-law, Sara Tooley of Centralia, IL and other extended family and many friends. She was preceded in death by her parents; father-in-law and mother-in-law, James and Esther Tooley and brother-in-law, Larry Tooley. Arrangements for Patricia Ann “Patti” (Stubblefield) Tooley were entrusted to Wilson-McReynolds Funeral Home, 900 N. Court St., Marion, IL. The time of the visitation for family and friends was from 5:00 p.m. to 8:00 p.m. on Thursday, February 12th at the funeral home. During the time of visitation a “Reflection of Life” DVD Memorial Tribute featuring special people, places and events of Patti’s life was presented to the family and friends. Prior to the time of visitation the prayer service was at 4:15 p.m. with Monsignor Ken Schaefer presiding. Following the prayer service the recorded vocal musical selection “Baby Doll Polka” by Frank Yankovic was presented. The funeral service was at 10:00 a.m. on Friday, February 13, 2015, at St. John the Baptist Catholic Church, located at 703 East Main St., West Frankfort, IL, with Rev. Dr. Eusebius Mbidoaka and Father Larry Lemay presiding. Comments of memory were presented by Pastor Ron Cremeens. The prelude and postlude musical selections were presented by pianist, Debra DeGorcia. Some of the special vocal musical selections presented during the mass were “Lord, When You Came”, “On This Day, O Beautiful Mother”, “Amazing Grace” and “Be Not Afraid” all by Debra DeGorcia and the youth choir of St. John’s Catholic School with Debra accompanying on the piano. Interment followed in San Carlo Catholic Cemetery of Herrin, IL with Father Larry Lemay presiding. Pallbearers were Vern Tooley, Bill Schmidt III, Brad Daron, John Tooley, Tim Kee and Jason Beers. Following the committal service at the cemetery the family and friends gathered at Sergio’s Restaurant in Herrin, IL for a meal and continued time of fellowship and support. For those who preferred, memorial contributions were made to “San Carlo Catholic Cemetery Fund” and mailed in care of Wilson-McReynolds Funeral Home, P.O. Box 370, Marion, IL 62959. Memorial envelopes were available at the funeral home. For additional information please contact the funeral home by calling 618-993-2131.

The family of Patricia Ann "Patti" (Stubblefield) Tooley created this Life Tributes page to make it easy to share your memories.